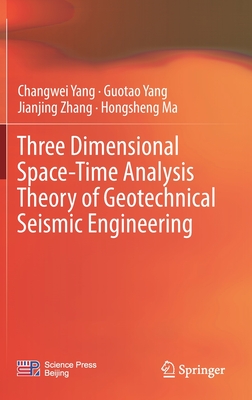 Written by respected experts, this book presents essential findings on the Wenchuan earthquake. It establishes a series of time-frequency analysis methods, and subsequently applies them to the layered site, slope, and earth-retaining wall. Further, it examines various cases and their solutions, and shares the results of numerous shaking-table tests and numerical simulations. As such, it is a valuable resource for researchers and engineers in the fields of geotechnical engineering and anti-seismic engineering.

Dr. Yang Changwei graduated in Geotechnical Engineering from the Department of Civil Engineering, Southwest Jiaotong University in 2014, and is a member of the Chinese Society for Rock Mechanics. His interests include disaster prevention and reduction for high-speed railways and highways. He has authored over 50 papers published in peer-reviewed journals, been granted four software copyrights, was the lead author of three sets of Chinese standards, and published three books. He also won the Liu Huixian Earthquake Engineering Scholarship Award in 2013, which only eight doctors in the world have won; the Si Shi Yang Hua Medal which is the blue ribbon at the Southwest Jiaotong University, the Progress Prize from Chinese Railway Institute of Science and Technology in 2012, and the Chinese Journal of Rock Mechanics and Engineering Society's National excellent Doctoral Dissertation Award in 2015.

Dr. Yang Guotao graduated in Geotechnical Earthquake Engineering from the Department of Civil Engineering, Beijing Jiaotong University and is currently a Deputy Director of the China Railways Corporation. His research interests focus on subgrade engineering. With 15 years' experience in the field, he has proposed, led and managed various research projects, such as Railway Development Plans. He has authored over 10 papers published in peer-reviewed journals and been granted three software copyrights. He is the project leader of six sets of Chinese standards and the first author of one book. He has also won several China Railway Society Science and Technology Progress Awards (Grand Prize and First Prize).