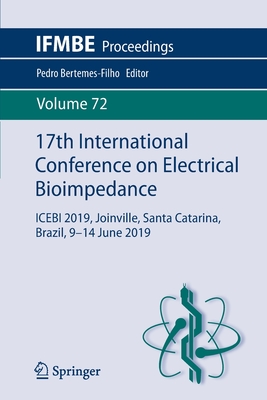 
This volume presents the proceedings of the 17th International Conference on Electrical Bioimpedance (ICEBI 2019). The conference was held in Joinville, Santa Catarina, Brazil from 9-14 June 2019.
Topics of the proceedings include these tracks:


Pedro Bertemes Filho was born on March 1970 on the island of Florianopolis, Brazil. He completed his Electrical Engineering undergraduate course in 1995 at the State University of Santa Catarina (UDESC) and his Masters in Biomedical Engineering in 1998 at the Federal University of Santa Catarina (UFSC). After which, he completed his PhD in Medical Physics in 2002 at The University of Sheffield (UK).
He conducted two post-doctoral studies - Sao Paulo in 2003 and Sheffield in 2013. Pedro received the Fulbright Visiting Research award in Dartmouth College and Visiting Staff Researcher position by the Erasmus Programme in the University of Ljubljana, both in 2017. He has been a Titular Professor in UDESC since 2004, lecturing in areas such as electronic instrumentation, sensors and transducers, introduction of biomedical engineering for masters and doctorate students. Pedro is also the leader of the biomedical engineering research group at UDESC, a member of IEEE, ISEBI, ICPRBI, SBEB, IFMBE, CMBES, ATINER and a reviewer of more than six international journals. His areas of research focuses on electrical bioimpedance and bioinstrumentation. In addition, he is the editor of 'Bioimpedance in Biomedical Applications and Research' published by Springer. Recently, he is the Head of the Department of Electrical Engineering in UDESC.