Recent Advances in Applications of Computational and Fuzzy Mathematics 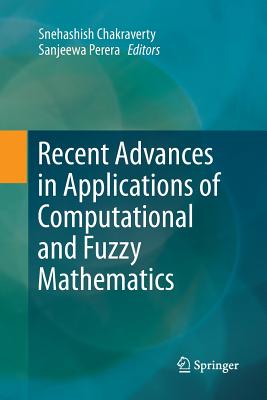 This book addresses the basics of interval/fuzzy set theory, artificial neural networks (ANN) and computational methods. It presents step-by-step modeling for application problems along with simulation and numerical solutions.

In general, every science and engineering problem is inherently biased by uncertainty, and there is often a need to model, solve and interpret problems in the world of uncertainty. At the same time, exact information about models and parameters of practical applications is usually not known and precise values do not exist.

This book discusses uncertainty in both data and models. It consists of seven chapters covering various aspects of fuzzy uncertainty in application problems, such as shallow water wave equations, static structural problems, robotics, radon diffusion in soil, risk of invasive alien species and air quality quantification. These problems are handled by means of advanced computational and fuzzy theory along with machine intelligence when the uncertainties involved are fuzzy. The proposed computational methods offer new fuzzy computing methods that help other areas of knowledge construction where inexact information is present.

Dr. S. Chakraverty has 27 years' experience as a researcher and teacher. He is currently a Professor of Mathematics at the National Institute of Technology, Rourkela, Odisha, India. Prior to this he was with CSIR-Central Building Research Institute, Roorkee, India. Dr. Chakraverty received his Ph.D. from IIT Roorkee in 1992. He then pursued postdoctoral research at the Institute of Sound and Vibration Research (ISVR), University of Southampton, U.K. and at the Faculty of Engineering and Computer Science, Concordia University, Canada. He was a Visiting Professor at Concordia and McGill Universities, Canada, from 1997 to 1999 and Visiting Professor at the University of Johannesburg, South Africa in 2011-2014. He has authored/co-authored 11 books, published 283 research papers in journals and conferences and two more books are ongoing. He is on the Editorial Boards of various international journals, book series and conferences. Dr. Chakraverty is the Chief Editor of the International Journal of Fuzzy Computation and Modelling (IJFCM), Inderscience Publisher, Switzerland and is Guest Editor for various other journals. He is also a reviewer for around 50 national and international journals and was the President of the Section of Mathematical Sciences (including Statistics) of Indian Science Congress (2015-2016) and the Vice President - Orissa Mathematical Society (2011-2013). Dr. Chakraverty is the recipient of a number of prestigious awards: Indian National Science Academy (INSA) nomination under the International Collaboration/Bilateral Exchange Program (with Czech Republic), Platinum Jubilee ISCA Lecture Award (2014), CSIR Young Scientist (1997), BOYSCAST (DST), UCOST Young Scientist (2007, 2008), Golden Jubilee Director's (CBRI) Award (2001), INSA International Bilateral Exchange Award ([2010-11 (selected but could not undertake), 2015 (selected)], and Roorkee University Gold Medals (1987, 1988) for first positions in M.Sc. and M.Phil. Dr. Chakraverty has been Principal Investigator of 16 research projects funded by international and national agencies. His current research areas include soft computing and machine intelligence, artificial neural networks, fuzzy and interval computations, numerical analysis, differential equations, mathematical modeling, uncertainty modeling, vibration and inverse vibration problems.

Dr. S.S.N. Perera has 16 years of research and teaching experience. He received his Ph.D. in Mathematical Modeling from the TU Kaiserslautern, Germany and University of Colombo, Sri Lanka (2008) under the DAAD scholarship program and his M.Sc. from ICTP/SISSA, Trieste, Italy (2004). He is currently working at the University of Colombo as a senior lecturer in Mathematics. His research interests include mathematical modeling in biology, infectious diseases, natural sciences, actuarial science, and computational biology, fuzzy logic based modeling and stochastic modeling. He has published numerous book chapters as well as research papers in various leading national and international journals. Dr. Perera is a member of the Editorial Board of the Journal of National Science Foundation, which is the only Sri Lankan journal in the science citation index.