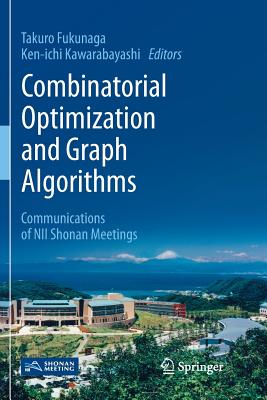 Covering network designs, discrete convex analysis, facility location and clustering problems, matching games, and parameterized complexity, this book discusses theoretical aspects of combinatorial optimization and graph algorithms. Contributions are by renowned researchers who attended NII Shonan meetings on this essential topic. The collection contained here provides readers with the outcome of the authors' research and productive meetings on this dynamic area, ranging from computer science and mathematics to operations research.

Networks are ubiquitous in today's world: the Web, online social networks, and search-and-query click logs can lead to a graph that consists of vertices and edges. Such networks are growing so fast that it is essential to design algorithms to work for these large networks. Graph algorithms comprise an area in computer science that works to design efficient algorithms for networks. Here one can work on theoretical or practical problems where implementation of an algorithm for large networks is needed. In two of the chapters, recent results in graph matching games and fixed parameter tractability are surveyed.

Combinatorial optimization is an intersection of operations research and mathematics, especially discrete mathematics, which deals with new questions and new problems, attempting to find an optimum object from a finite set of objects. Most problems in combinatorial optimization are not tractable (i.e., NP-hard). Therefore it is necessary to design an approximation algorithm for them. To tackle these problems requires the development and combination of ideas and techniques from diverse mathematical areas including complexity theory, algorithm theory, and matroids as well as graph theory, combinatorics, convex and nonlinear optimization, and discrete and convex geometry. Overall, the book presents recent progress in facility location, network design, and discrete convex analysis.

Takuro Fukunaga is currently a project associate professor at the National Institute of Informatics. After receiving a B.A. in engineering and an M.A. and Ph.D. in informatics from Kyoto University in 2003, 2005, and 2007, respectively, he was an assistant professor there until January 2013. He is a member of the Operations Research Society of Japan, the Information Processing Society of Japan, and IEEE.
Ken-ichi Kawarabayashi is a professor at the National Institute of Informatics. He received a B.A., M.A., and Ph.D. from Keio University in 1998, 2000, and 2001, respectively. The prizes he has been awarded include the IBM Japanese Science Prize, the JSPS Prize 2013, the Japan Academy Medal in 2013, the SODA best paper award in 2013, and the Mathematics Annual Spring Prize in 2015.