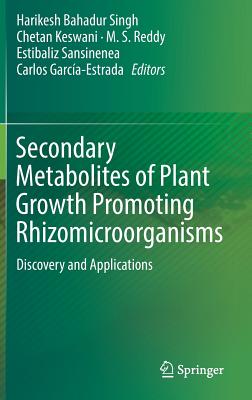 Harikesh Bahadur Singh is a Professor in the Department of Mycology and Plant Pathology, Institute of Agricultural Sciences, Banaras Hindu University, Varanasi, India. Prof. Singh has been decorated with several national and international awards for his key role in popularizing organic farming and translating agriculturally important microorganisms from lab to land. To his credit he has 20 U.S. patents which have been successfully transferred for commercial production of biopesticides to several industrial houses in India.

Chetan Keswani is a Post-Doctoral Fellow in the Department of Biochemistry, Institute of Science, Banaras Hindu University, Varanasi, India. He has keen interest in regulatory and commercialization issues of agriculturally important microorganisms. He is an elected Fellow of the Linnaean Society of London, UK. He received Best Ph.D. Thesis Award from the Uttar Pradesh Academy of Agricultural Sciences, India in 2015. He is an editorial board member of several reputed agricultural microbiology journals.

Munagala S. Reddy is a Professor in the Department of Entomology & Plant Pathology at Auburn University, USA. He is the founder Chairman of the Asian PGPR Society for Sustainable Agriculture. He is a recipient of many prestigious awards from USA, Canada, Saudi Arabia, Indonesia, Philippines, China, India, etc. He has been successful in generating several millions of dollars funding from Federal, State, Private and International agencies for his research to commercialize biofertilizers and biofungicides. Currently, he is an entrepreneur and consultant for several national and international agencies. He has authored over 300 publications.

Carlos García-Estrada received his D. Phil from the University of León (Spain) in 2003 after completing his training at University of Mississippi, MS (USA). In 2004, he received the Extraordinary Award in a Doctorate and started his postdoctoral studies at Instituto de Biotecnología de León (INBIOTEC). Since 2011, he is the Head of the Biopharma and Biomedicine Area of INBIOTEC and Adjunct Professor at the University of León. He has published more than 50 scientific articles, 13 book chapters and has edited 2 books.