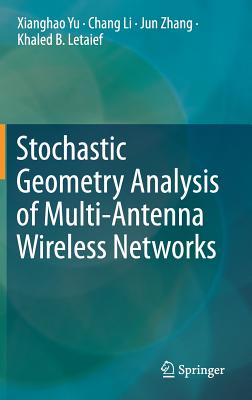 This book presents a unified framework for the tractable analysis of large-scale, multi-antenna wireless networks using stochastic geometry. This mathematical analysis is essential for assessing and understanding the performance of complicated multi-antenna networks, which are one of the foundations of 5G and beyond networks to meet the ever-increasing demands for network capacity. Describing the salient properties of the framework, which makes the analysis of multi-antenna networks comparable to that of their single-antenna counterparts, the book discusses effective design approaches that do not require complex system-level simulations. It also includes various application examples with different multi-antenna network models to illustrate the framework's effectiveness.

Xianghao Yu received his B.Eng. degree in Information Engineering from Southeast University, Nanjing, China, in 2014, and his Ph.D. degree in Electronic and Computer Engineering from the Hong Kong University of Science and Technology (HKUST), Kowloon, Hong Kong, in 2018. His research interests include millimeter wave communications, MIMO systems, mathematical optimization, and stochastic geometry. He was the recipient of the IEEE GLOBECOM 2017 Best Paper Award.
Chang Li received his B.Eng. degree in Information and Communication Engineering from Xi'an Jiaotong University, Xi'an, China, in 2010, and his Ph.D. degree in Electrical and Computer Engineering from the Hong Kong University of Science and Technology (HKUST), Kowloon, Hong Kong, in 2016. From February 2015 to January 2016, he was a Visiting Student at the Laboratory for Information and Decision Systems (LIDS), Massachusetts Institute of Technology (MIT), Cambridge, MA, USA. He is currently a guest researcher with the Advanced Network Technologies Division (ANTD), National Institute of Standards and Technology (NIST). His research interests include network localization and navigation, heterogeneous networks, MIMO systems, green communications, and the application of stochastic geometry.
Jun Zhang received his Ph.D. degree in Electrical and Computer Engineering from the University of Texas at Austin. He is currently an Assistant Professor at the Department of Electronic and Information Engineering at the Hong Kong Polytechnic University. Dr. Zhang co-authored the book Fundamentals of LTE (Prentice-Hall, 2010). He is a co-recipient of the 2016 Marconi Prize Paper Award in Wireless Communications, the 2014 Best Paper Award for the EURASIP Journal on Advances in Signal Processing, an IEEE GLOBECOM Best Paper Award in 2017, an IEEE ICC Best Paper Award in 2016, and an IEEE PIMRC Best Paper Award in 2014. One paper he co-authored received the 2016 IEEE Signal Processing Society Young Author Best Paper Award. He also received the 2016 IEEE Communications Society Asia-Pacific Best Young Researcher Award. His research interests include wireless communications and networking, mobile edge computing and edge learning, distributed optimization and learning, and big data analytics systems.
Khaled B. Letaief received his B.S. degree with distinction, M.S. and Ph.D. degrees in Electrical Engineering from Purdue University, USA. He is an internationally recognized leader in wireless communications and networks and has served as a consultant for various organizations. From 1990 to 1993, he was a faculty member at the University of Melbourne, Australia. Since 1993, he has been with HKUST, Hong Kong. While at HKUST, he has held various administrative positions, including the Dean of Engineering and Director of the Hong Kong Telecom Institute of Information Technology.
He is the founding Editor-in-Chief of the prestigious IEEE Transactions on Wireless Communications. He is also the recipient of numerous distinguished awards and honors including the 2016 IEEE Marconi Prize Award in Wireless Communications, 2011 IEEE Communications Society Harold Sobol Award, 2010 Purdue University Outstanding Electrical and Computer Engineer Award, 2007 IEEE Communications Society Joseph LoCicero Publications Exemplary Award, and over 15 IEEE Best Paper Awards.
Dr. Letaief is a Fellow of IEEE and a Fellow of HKIE. He is recognized by Thomson Reuters as an ISI Highly Cited Researcher. He is also known for his dedicated service to professional societies and in particular IEEE, where he has served in various leadership positions, including President of the IEEE Communications Society.