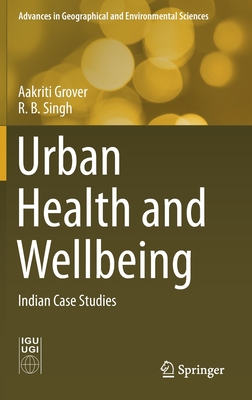 This book focuses on interdisciplinary issues of human health in the changing urban environments of India's largest megacities - Delhi and Mumbai. The authors explore human health concerns related to increased temperatures and air pollution in these cities in a study based on primary data collected through interviews, as well as secondary data on causes of mortality from 2001 to 2012. During this period, the surface temperatures for both megacities were mapped using Landsat Images.

The rapidly increasing populations of cities and urban centers alter ecosystem services such as water, air and land cover, with disastrous impacts on health and wellbeing, particularly in megacities. In 2015, polluted air was estimated to have been responsible for 6.4 million deaths worldwide, and it is projected that it will cause between 6 and 9 million deaths per year by 2060. In 2017, outdoor air pollution resulted in 1.2 million deaths in India and brought about a 3% loss in GDP. The increase in population, vehicles, and industries has led to changes in land use and land cover and a rise in city temperatures and air pollution, creating urban heat islands (UHIs). Together, UHIs and air pollution have damaging impacts on human health that range from stress and headache to asthma, bronchitis, and chronic diseases, and even to death.

Delhi has been experiencing emergency conditions in terms of environmental health over the past two years. At the same time, both the Delhi and Mumbai urban agglomerations are growing at a rapid pace, and the United Nations has projected that they will be the second and third most populous cities in the world by 2025. In this context, the book offers significant insights into the past patterns and responses to the present global urban health emergencies, and explores sustainable means of combating the problem to enable college and university researchers to develop innovative solutions. Further. It presents trans-disciplinary research that cuts across the WHO Action Plan, the Sustainable Development Goals, the Sendai Framework for Disaster Risk Reduction, and Habitat III to help policymakers gain a better understanding of the global challenges of urban health and wellbeing. The book is especially useful for students and researchers in geography, urban demography, urban studies, environmental studies, health sciences, and policy studies.

Dr. Aakriti Grover is an Assistant Professor at the Department of Geography, School of Earth Sciences, Central University of Tamil Nadu, India. She specializes in urban environment, urban health, and disaster management and is a World Social Science Fellow. She has published nine research papers in peer-reviewed journals and contributed three chapters to edited books, including a policy brief for the Global Sustainable Development Report by the United Nations.

Dr. R.B.Singh is first Indian and second Asian elected as the Secretary General and Treasurer of the International Geographical Union (2018-22). He has been a Professor of Geography at the Department of Geography, Delhi School of Economics, University of Delhi, India, since 1996. He is also coordinator of Departmental Research Support for the University Grants Commission's Special Assistance Programme (UGC-SAP-DRS III), and specializes in land use, environmental studies, climate change, urban and regional development, disaster management, remote sensing, and geographic information systems. Dr. Singh is currently chair of the Council for Scientific and Industrial Research (CSIR) - Central Food Technological Research Institute, Mysore (India), and a member of the International Council of Science (ICSU) and the prestigious scientific committee Health and Wellbeing in the Changing Urban Environment: a Systems Analysis Approach. Since 2012, Dr. Singh has been the vice-president of the International Geographical Union (IGU), the world's leading geographical body, and was reelected for a second consecutive term (2016-2020).