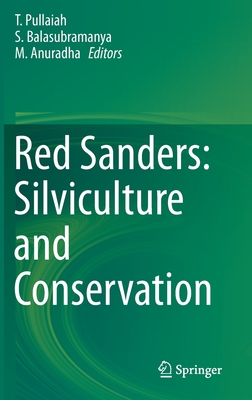 Pterocarpus santalinus L.f., popularly known as Red Sanders, an endemic tree, belonging to the family Fabaceae is confined to the southern parts of Eastern Ghats. IUCN has listed this tree as endangered. The plant has superlative characteristics in its wood and has many medicinal properties. This plant has attracted the attention of both foresters and lay man because of its high valued wood which is being illegally harvested creating law and order problem. This book is a comprehensive monograph on Red Sanders and is divided into 15 chapters. The book provides information on taxonomy, morphology, distribution, wood anatomy, wood properties and uses, dye principle, phytochemistry, pharmacology, Silvicultural aspects, propagation, cultivation practices, reproductive biology, pests and diseases, biotechnology, molecular studies, conservation, trade, commerce, socioeconomic aspects of Red Sanders, and grey areas of research. The book is profusely illustrated with colour photographs and line drawings. Relevant references have been provided under each chapter. This monograph on Red Sanders with systematic representation of information and illustrations will be a desk reference and field guide to foresters, botanists, researchers, farmers, traders and environmentalists.

Thammineni Pullaiah, PhD, is a former professor at the Department of Botany at Sri Krishnadevaraya University in Andhra Pradesh, India, where he has taught for more than 35 years. He has held several positions at the university. He was president of the Indian Botanical Society (2014), president of the Indian Association for Angiosperm Taxonomy (2013), and Fellow of Andhra Pradesh Akademi of Sciences. He was awarded the Panchanan Maheshwari Gold Medal, the Dr. G. Panigrahi Memorial Lecture Award of the Indian Botanical Society, the Prof. Y.D. Tyagi Gold Medal of the Indian Association for Angiosperm Taxonomy, and a Best Teacher Award from the Government of Andhra Pradesh. Under his guidance, 54 students obtained their doctoral degrees. He has authored 53 books, edited 18 books, and published over 330 research papers, including reviews and book chapters. He was also a member of the Species Survival Commission of the International Union for Conservation of Nature (IUCN).

Dr. M. Anuradha Post graduate in Botany with university first Rank from Sri Krishnadevaraya University, Anantapur. Continued for M.Phil. as UGC JRF and completed Ph.D. as CSIR, SRF and got doctorate in plant tissue culture of Legume trees. Started career as a Scientist at Dr. Reddy's lab, Medicinal Plant Research Division, Hyderabad worked in anticancer plants and in vitro production of Taxol and Camptothecins. Later joined SAMI labs Pvt. Ltd. Bangalore, a reputed herbal and nutraceutical industry and worked on various aspects of medicinal and nutraceutical herbs. Along with like-minded technocrats, started her own company Rishi Herbal Technologies Pvt., Ltd and a founder member and president of Rishi Foundation, Research Institute for Social and Health improvement. Associated as a Principal Padmashree Institute of Management and Sciences, playing a key role and bridging gap between industry and academia. She was also Chairperson to Board of studies to KSOU and Bangalore university and Director to DDU KAUSHAL kendra at Padmashree Institute. To her credit she was selected as young scientist by DST, New Delhi in the year 2001. Till now she completed projects worth more than 2 crores, from various national and international agencies like Department of Biotechnology, Department of Science and Technology, National Medicinal Plant Board, New Delhi and Rufford foundation, U.K. She is instrumental in starting Biotech finishing school at Padmashree Institute of Management and Sciences, Bengaluru. To her credit she published more than 30 papers in national and international journals and co- author for book chapters. She also filed 6 Indian patents and also one in US patent granted. Guided 6 doctoral students and more than100 student projects. Mentored Department and Science and Technology, Rajat Jayanthi student projects and Vision Group of Science and Technology, spice projects. Travelled extensively to rural and semiurban areas to popularize science and create awareness.

Dr. S. Balasubramanya obtained his M.Sc. and Ph.D. degrees in Botany from Bangalore University. He worked in various organisations and companies which include Sami Labs Ltd., Bangalore, Rishi Herbal Technologies Pvt. Ltd., Padmashree Institute of Management and Science, Bangalore. Presently he is Senior consultant for Karnataka Biotechnology and Information Technology Services (KBITS), a State Government organization. He published 13 papers in journals of International repute and contributed a book chapter. He got a US patent on Enhancing secondary metabolites and nutrients in plants and plant parts and filed six more patents. He was principal investigator/coinvestigator of five major research projects funded by National Medicinal Plants Board, Department of Science and Technology, Government of India, Ruford Foundation, U.K. and Charms ChemPvt. Ltd. India worth more than a crore of Rupees.