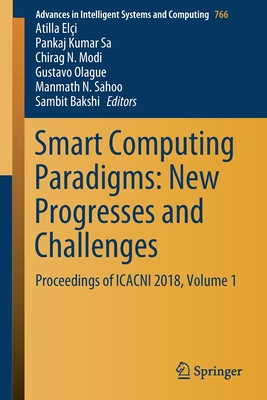 This two-volume book focuses on both theory and applications in the broad areas of communication technology, computer science and information security. It brings together contributions from scientists, professors, scholars and students, and presents essential information on computing, networking, and informatics. It also discusses the practical challenges encountered and the solutions used to overcome them, the goal being to promote the “translation” of basic research into applied research, and of applied research into practice. The works presented here will also demonstrate the importance of basic scientific research in a range of fields.

Atilla Elçi is an Emeritus Full Professor and Chairman of the Department of Electrical and Electronics Engineering at Aksaray University, Turkey (August 2012-September 2017). He previously served as a Full Professor and Chairman of Computer and Educational Technology at Süleyman Demirel University, Isparta, Turkey (May 2011-June 2012). Dr. Elçi graduated with a degree in Electrical Engineering from METU, Turkey and completed his M.Sc. and Ph.D. in Computer Science at Purdue University, USA. He has 71 papers, 11 books, 10 conference publications and 4 talks to his credit. His research areas include semantic web technology; information security/assurance; semantic robotics; programming systems and languages; and semantics in education.

Pankaj Kumar Sa received his Ph.D. degree in Computer Science in 2010. He is currently serving as an Associate Professor in the Department of Computer Science and Engineering, National Institute of Technology Rourkela, India. His research interests include computer vision, biometrics, visual surveillance, and robotic perception. He has co-authored a number of research articles in various journals, conferences, and book chapters and has co-investigated research and development projects funded by SERB, DRDOPXE, DeitY, and ISRO. He has received several prestigious awards and honors for his contributions in academics and research.

Gustavo Olague received his Ph.D. in Computer Vision, Graphics and Robotics from the INPG (Institut Polytechnique de Grenoble) and INRIA (Institut National de Recherche en Informatique et Automatique) in France. He is currently a Professor at the Department of Computer Science at CICESE (Centro de Investigación Científica y de Educación Superior de Ensenada) in Mexico, and the Director of its EvoVisión Research Team. He is also an Adjoint Professor of Engineering at UACH (Universidad Autonóma de Chihuahua). He has authored over 100 conference proceedings papers and journal articles, coedited two special issues in Pattern Recognition Letters and Evolutionary Computation, and served as co-chair of the Real-World Applications track at the main international evolutionary computing conference, GECCO (ACM SIGEVO Genetic and Evolutionary Computation Conference). Prof. Olague has received numerous distinctions, among them the Talbert Abrams Award presented by the American Society for Photogrammetry and Remote Sensing (ASPRS); Best Paper awards at major conferences such as GECCO, EvoIASP (European Workshop on Evolutionary Computation in Image Analysis, Signal Processing and Pattern Recognition) and EvoHOT (European Workshop on Evolutionary Hardware Optimization); and twice the Bronze Medal at the Humies (GECCO award for Human-Competitive results produced by genetic and evolutionary computation). His main research interests are in evolutionary computing and computer vision.

Manmath Narayan Sahoo is an Assistant Professor at the Department of Computer Science and Engineering, National Institute of Technology Rourkela, India. His research interest areas are in fault tolerant systems, operating systems, distributed computing, and networking. He is a member of the IEEE, Computer Society of India and the Institutions of Engineers, India. He has published several papers in national and international journals.

Sambit Bakshi is currently with Centre for Computer Vision and Pattern Recognition of National Institute of Technology Rourkela, India. He also serves as an Assistant Professor in the Department of Computer Science & Engineering of the institute. He earned his Ph.D. degree in Computer Science & Engineering in 2015. His areas of interest include surveillance and biometric authentication. He currently serves as associate editor of International Journal of Biometrics (2013 -), IEEE Access (2016 -), Innovations in Systems and Software Engineering: A NASA Journal (2016 -), Expert Systems (2017 -), and PLOS One (2017 -). He has served/is serving as guest editor for reputed journals like Multimedia Tools and Applications, IEEE Access, Innovations in Systems and Software Engineering: A NASA Journal, Computers and Electrical Engineering, IET Biometrics, and ACM/Springer MONET. He is serving as the vice-chair for IEEE Computational Intelligence Society Technical Committee for Intelligent Systems Applications for the year 2019. He received the prestigious Innovative Student Projects Award 2011 from Indian National Academy of Engineering (INAE) for his master's thesis. He has more than 50 publications in reputed journals, reports, and conferences.