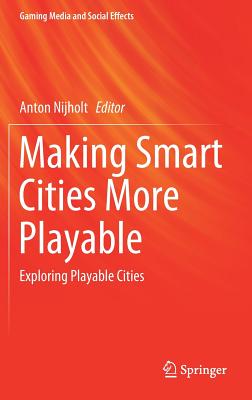 This book explores the ways in which the broad range of technologies that make up the smart city infrastructure can be harnessed to incorporate more playfulness into the day-to-day activities that take place within smart cities, making them not only more efficient but also more enjoyable for the people who live and work within their confines. The book addresses various topics that will be of interest to playable cities stakeholders, including the human-computer interaction and game designer communities, computer scientists researching sensor and actuator technology in public spaces, urban designers, and (hopefully) urban policymakers.

This is a follow-up to another book on Playable Cities edited by Anton Nijholt and published in 2017 in the same book series, Gaming Media and Social Effects.

His main research interests are in entertainment computing, multimodal interaction, affective computing, and brain-computer interfacing. He has produced hundreds of scientific publications, including (edited) books on the history of computing, language processing, and brain-computer interfacing. Recently he has edited two books: Playable Cities and Brain Art, both with Springer. He has been a Guest Editor for Journal on Multimodal User Interfaces, International Journal of Arts and Technology, Entertainment Computing, International Journal of Creative Interfaces and Computer Graphics (IJCICG) and Brain-Computer Interfaces. In addition, Professor Nijholt has served as Program Chair and General Chair for the leading international conferences on affective computing, multimodal interaction, virtual agents, and entertainment computing.