Smart Trends in Computing and Communications: Proceedings of Smartcom 2019 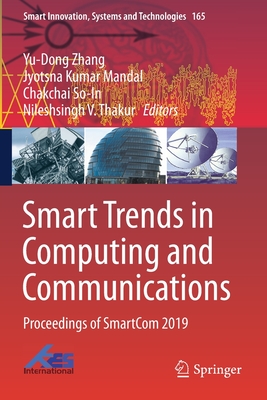 Prof. Yu-Dong Zhang received his B.S. and M.S. degrees from Nanjing University of Aeronautics and Astronautics in 2004 and 2007, prior to completing his Ph.D. in Signal and Information Processing at Southeast University in 2010. From 2010 to 2012, he worked at Columbia University as a postdoc. From 2012 to 2013, he worked as a research scientist at Columbia University and New York State Psychiatric Institute. From 2013 to 2017, he worked as a Full Professor and doctoral advisor at the School of Computer Science and Technology at Nanjing Normal University. Since 2018, he has been a Full Professor at the Department of Informatics, University of Leicester, UK.

Prof. Chakchai So-In has been with the Department of Computer Science at Khon Kaen University since 2010. Dr. So-In received his B.Eng. and M.Eng. degrees from Kasetsart University (KU), Bangkok, Thailand, in 1999 and 2001, respectively. He also completed M.S. and Ph.D. degrees in Computer Engineering at the Department of Computer Science and Engineering, Washington University, in St. Louis (WUSTL), MO, USA, in 2006 and 2010. He has more than 100 publications in prominent journals and proceedings with 10 books. He is also acting as editors, TPC, and reviewers for a number of Journals and Conferences. His research interests include Mobile Computing/Sensor Networks, Internet of Thing, Computer/Wireless/Distributed Networks, Cyber Security, and Intelligent Systems and Future Internet. He is also senior members of IEEE and ACM.

Prof. Nileshsingh V. Thakur is a Professor and Principal of Nagpur Institute of Technology, Nagpur, India. He completed his B.Eng. at the Government College of Engineering, Amravati, in 1992; his M.Eng. at SGB Amravati University in 2005; and his Ph.D. in Computer Science and Engineering at Visvesvaraya National Institute of Technology (VNIT), Nagpur, India, in 2010. His research interests are in Image & Video Processing, Advanced Optimization, Neural Networks, Sensor & Ad Hoc Networks, Pattern Recognition & Data Mining, etc. He has 27 years of teaching and research experience, and has published more than 80 papers in these areas.