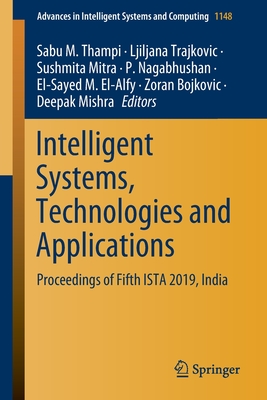 Sabu M. Thampi is a Professor at the Indian Institute of Information Technology and Management-Kerala (IIITM-K), Trivandrum, India. His current research interests include cognitive computing, IoT, authorship analysis, trust management, biometrics, social networks, nature-inspired computing, and video surveillance. He has published papers in book chapters, journals, and conference proceedings. He has authored and edited a few books. Sabu has served as Guest Editor for special issues in few journals and program committee member for many international conferences and workshops. Sabu is currently serving as Editor for Elsevier JNCA, Associate Editor for IEEE Access, and reviewer for several reputed international journals. Sabu is a Senior Member of IEEE and ACM.

Ljiljana Trajkovic received the Dipl. Ing. degree from the University of Pristina, Yugoslavia, in 1974, the M.Sc. degrees in electrical engineering and computer engineering from Syracuse University, Syracuse, NY, in 1979 and 1981, respectively, and the Ph.D. degree in electrical engineering from the University of California at Los Angeles, in 1986. She is currently a Professor in the School of Engineering Science at Simon Fraser University, Burnaby, British Columbia, Canada. Her research interests include high-performance communication networks, control of communication systems, computer-aided circuit analysis and design, and theory of nonlinear circuits and dynamical systems. She is a Professional Member of IEEE-HKN and a Life Fellow of the IEEE.

Sushmita Mitra is a Full Professor at the Machine Intelligence Unit (MIU), Indian Statistical Institute, Kolkata. She was the Head of MIU during the period 2010 to 2012. She is the author of many books. Dr. Mitra has guest edited special issues of several journals, is an Associate Editor of "IEEE/ACM Trans. on Computational Biology and Bioinformatics," "Information Sciences, "Neurocomputing," and is a Founding Associate Editor of "Wiley Interdisciplinary Reviews: Data Mining and Knowledge Discovery." She has more than 75 research publications in refereed international journals. Dr. Mitra is a Fellow of the IEEE. Her current research interests include data mining, pattern recognition, soft computing, image processing, and bioinformatics.

P. Nagabhushan, Director, Indian Institute of Information Technology, Allahabad, is a Professor in Computer Science and Engineering, University of Mysore, Mysore. He is actively associated with various academic, statutory, and professional bodies. He is a member of academic councils and board of studies of several universities. He is a visiting Professor and acting as a subject expert in many universities and institutes. Prof. Nagabhushan has worked as Investigator in several major funded projects. On the academic front, he has successfully guided 28 numbers of Ph.D.s and has authored more than 500 numbers of research papers out of which more than 100 papers are DBLP indexed. The citation index of 1856+ with H-index of 21 and i10 index of 53 reflects his academic accomplishments.

El-Sayed M. El-Alfy is a Professor in the College of Computer Sciences and Engineering, King Fahd University of Petroleum and Minerals (KFUPM), Saudi Arabia. He has 25+ years of experience in industry and academia involving research, teaching, supervision, curriculum design, program assessment and quality assurance. Prof. El-Alfy has been actively involved in several funded research projects and published widely in areas related to machine learning and nature-inspired computation with applications to data science and cyber analytics, pattern recognition, multimedia forensics, and security systems.

He published numerously in peer-reviewed intl journals and conferences, edited a number of books, contributed to organization of many intl conferences, served as guest editor for a number of special issues, and been in editorial board of a number of premium journals including IEEE/CAA Journal of Automatica Sinica, IEEE Transactions on Neural Networks and Learning Systems, International Journal on Trust Management in Computing and Communications, and Journal of Emerging Technologies in Web Intelligence (JETWI). He co-founded and coordinated a research group on Intelligent Systems at KFUPM. He is a senior member of IEEE, ABET/CSAB Program Evaluator, member of IEEE Computational Intelligence Society, member of IEEE Communications Society, and x-member of ACM and IEEE Computer Society. His work has been internationally recognized and received several awards.

Zoran S. Bojkovic received his B.Sc., M.Sc., and Ph.D. degrees all in electrical engineering from the University of Belgrade, Faculty of Electrical Engineering. He is a full Professor from the University of Belgrade. He was a visiting Professor at more than 20 universities worldwide and taught a number of courses in the field of digital signal processing, communication and computer networks, and multimedia communications. Prof. Bojkovic is the co-author of 7 international books. He has published more than 460 papers in peer-reviewed journals, conference proceedings, and publications. He is a member of review board of more than 10 high-level journals and conference proceedings. Prof. Zoran Bojkovic is a Senior Member of IEEE.

Deepak Mishra Dr. Mishra pursued his Ph.D. at IIT Kanpur (2007) in the Electrical Engineering Department. His thesis title was "Novel Biologically Inspired Neural Network Models." Later he joined as a postdoc researcher at the University of Louisville in the field of signal processing and system neuroscience. He opted to work as an academic faculty at the Indian Institute of Space Science and Technology Trivandrum in 2010 and continued to work as an Associate Professor in the Department of Avionics. He was also awarded Young Scientist award from System Society of India for his research work in the year 2012. His research interest includes neural networks and machine learning, computer vision and graphics, and image and video processing. He has published research papers both in international and national journals of repute and presented his research work in various international and national conferences.