Efficient Integration of 5g and Beyond Heterogeneous Networks 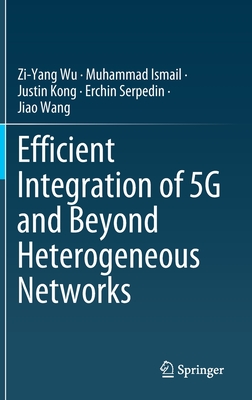 This book discusses the smooth integration of optical and RF networks in 5G and beyond (5G+) heterogeneous networks (HetNets), covering both planning and operational aspects. The integration of high-frequency air interfaces into 5G+ wireless networks can relieve the congested radio frequency (RF) bands. Visible light communication (VLC) is now emerging as a promising candidate for future generations of HetNets. Heterogeneous RF-optical networks combine the high throughput of visible light and the high reliability of RF. However, when implementing these HetNets in mobile scenarios, several challenges arise from both planning and operational perspectives. Since the mmWave, terahertz, and visible light bands share similar wave propagation characteristics, the concepts presented here can be broadly applied in all such bands.

To facilitate the planning of RF-optical HetNets, the authors present an algorithm that specifies the joint optimal densities of the base stations by drawing on stochastic geometry in order to satisfy the users' quality-of-service (QoS) demands with minimum network power consumption. From an operational perspective, the book explores vertical handovers and multi-homing using a cooperative framework. For vertical handovers, it employs a data-driven approach based on deep neural networks to predict abrupt optical outages; and, on the basis of this prediction, proposes a reinforcement learning strategy that ensures minimal network latency during handovers. In terms of multi-homing support, the authors examine the aggregation of the resources from both optical and RF networks, adopting a two-timescale multi-agent reinforcement learning strategy for optimal power allocation.

Presenting comprehensive planning and operational strategies, the book allows readers to gain an in-depth grasp of how to integrate future coexisting networks at high-frequency bands in a cooperative manner, yielding reliable and high-speed 5G+ HetNets.

Zi-Yang Wu received his B.S. degree in Electronic Science and Technology and his M.S. degree in Circuits and Systems from Northeastern University, Shenyang, China, in 2014 and 2016, respectively, where he is currently pursuing his Ph.D. degree in Electrical and Electronic Engineering. He was also a joint Ph.D. student at the Department of Electrical and Computer Engineering, Texas A&M University, College Station, USA, under a full scholarship granted by the State Scholarship Fund of China, from 2018 to 2019.

Muhammad Ismail received his B.Sc. and M.Sc. degrees in Electrical Engineering (Electronics and Communications) from Ain Shams University, Cairo, Egypt, in 2007 and 2009, respectively, and his Ph.D. degree in Electrical and Computer Engineering from the University of Waterloo, Canada, in 2013. He is currentlyan Assistant Professor at the Computer Science Department, Tennessee Tech University, USA. He was a co-recipient of the Best Paper Awards in the IEEE ICC 2014, the IEEE Globecom 2014, the SGRE 2015, the Green 2016, and the IEEE Technical Committee on Green Communications and Networking (TCGCN) Best Paper Award at the IEEE ICC 2019.

Justin Kong received his B.S. and Ph.D. degrees in Electrical Engineering from Korea University, Seoul, South Korea, in 2009 and 2015, respectively. From 2015 to 2018, he was a Postdoctoral Research Fellow at Nanyang Technological University, Singapore, and he was a Postdoctoral Research Associate with Texas A&M University from 2018 to 2019. In 2019, he joined the US Army Research Laboratory, where he is currently a Postdoctoral Fellow. He received the Bronze Prize in the Samsung Humantech Paper Contest in 2012 and 2013, and was a recipient of the IEEE TCGCN Best Paper Award at the IEEE ICC 2019.

Erchin Serpedin received his specialization degree in Transmission and Processing of Information from Ecole Superieure D'Electricite (SUPELEC), Paris, in 1992, his M.Sc. degree from the Georgia Institute of Technology in 1992, and his Ph.D. degree from the University of Virginiain 1999. He is currently a Professor at the Department of Electrical and Computer Engineering, Texas A&M University, College Station, TX, USA, and an IEEE fellow. He has served as an Associate Editor for 12 journals and as the Technical Chair for six major conferences.