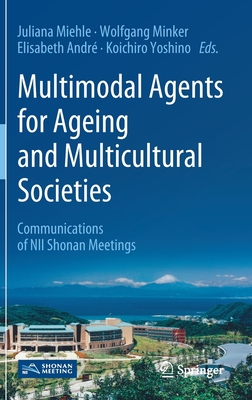 This book aims to explore and discuss theories and technologies for the development of socially competent and culture-aware embodied conversational agents for elderly care. To tackle the challenges in ageing societies, this book was written by experts who have a background in assistive technologies for elderly care, culture-aware computing, multimodal dialogue, social robotics and synthetic agents.

Chapter 1 presents a vision of an intelligent agent to illustrate the current challenges for the design and development of adaptive systems. Chapter 2 examines how notions of trust and empathy may be applied to human-robot interaction and how it can be used to create the next generation of emphatic agents, which address some of the pressing issues in multicultural ageing societies. Chapter 3 discusses multimodal machine learning as an approach to enable more effective and robust modelling technologies and to develop socially competent and culture-aware embodied conversational agents for elderly care. Chapter 4 explores the challenges associated with real-world field tests and deployments. Chapter 5 gives a short introduction to socio-cognitive language processing that describes the idea of coping with everyday language, irony, sarcasm, humor, paralinguistic information such as the physical and mental state and traits of the dialogue partner, and social aspects.

This book grew out of the Shonan Meeting seminar entitled "Multimodal Agents for Ageing and Multicultural Societies" held in 2018 in Japan. Researchers and practitioners will be helped to understand the emerging field and the identification of promising approaches from a variety of disciplines such as human-computer interaction, artificial intelligence, modelling, and learning.

Juliana Miehle studied Electrical Engineering with concentration in "Communication and System Technology" at Ulm University, Germany. She received her B.Sc. degree in 2013 and her M.Sc. degree in 2015. After doing an internship at Nara University of Science and Technology, Japan, she joined the Dialogue Systems Group at Ulm University, Germany, under the supervision of Prof. Dr. Dr.-Ing. Wolfgang Minker in 2016 as a research assistant and Ph.D. student. Her research interests include user-adaptive dialogue management, communication styles in human-computer interaction, and machine learning applications.

Wolfgang Minker received the diploma (M.Sc.) and Ph.D. degrees in engineering science from the University of Karlsruhe, Germany, in 1997, and the Ph.D. degree in computer science from Université Paris-Sud, France, in 1998. From 1993 until 2000, he was a Teaching Assistant with LIMSI-CNRS, Université Paris- Sud, France, and subsequently worked as a Senior Researcher with the Dialogue Systems Group of Daimler Chrysler Research and Technology, Ulm, Germany, from 2000 to 2003. Since 2003, he has been a Full Professor with Ulm University, Germany, and also became a Co-Director of the International Research Laboratory "Multimodal Biometric and Speech Systems", ITMO University, St. Petersburg, Russia, in 2017. The research at his group is focused on dialogue systems with special interests in spoken dialogue interaction in ambient intelligent environments, assistive, adaptive, and proactive spoken language dialogue interaction, dialogue modeling, and argumentative dialogue systems.

Koichiro Yoshino is a Team Leader at Guardian Robot Project (GRP) in Institute of Physical and Chemical Research (RIKEN), and a Visiting Associate Professor at Nara Institute of Science and Technology (NAIST). He received his bachelor degree of arts from Keio University in 2009, master degree of informatics from Kyoto University in 2011, and Ph.D. in informatics from Kyoto University in 2014. He worked at Kyoto University as a postdoc, and NAIST as an assistant professor. He is working on areas of spoken and natural language processings, especially on robot dialogue systems. Dr. Koichiro Yoshino received several honors including the best paper award of IWSDS 2020, and the best paper award of the 1st NLP4ConvAI workshop. He is a member of IEEE, SIGDIAL, ACL, ANLP, IPSJ, RSJ, and JSAI.