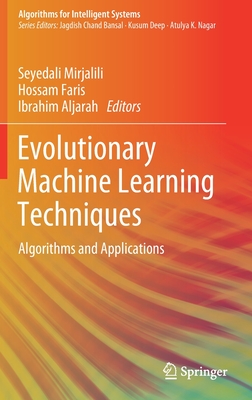 Dr. Seyedali Mirjalili is a lecturer at Griffith College, Griffith University, and internationally recognised for his advances in nature-inspired artificial intelligence (AI) techniques. He is the author of five books, 100 journal articles, 20 conference papers, and 20 book chapters. With over 10000 citations and H-index of 40, he is one of the most influential AI researchers in the world. From Google Scholar metrics, he is globally the 3rd most cited researcher in Engineering Optimisation and Robust Optimisation using AI techniques. He has been the keynote speaker of several international conferences and is serving as an associate editor of top AI journals including Applied Soft Computing, Applied Intelligence, IEEE Access, Advances in Engineering Software, and Applied Intelligence.

Hossam Faris is a Professor in the Information Technology Department at King Abdullah II School for Information Technology at The University of Jordan, Jordan. Hossam Faris received his B.A. and M.Sc. degrees in computer science from the Yarmouk University and Al-Balqa` Applied University in 2004 and 2008, respectively, in Jordan. He was awarded a full-time competition-based scholarship from the Italian Ministry of Education and Research to peruse his Ph.D. degrees in e-Business at the University of Salento, Italy, where he obtained his Ph.D. degree in 2011. In 2016, he worked as a postdoctoral researcher with the GeNeura team at the Information and Communication Technologies Research Center (CITIC), University of Granada, Spain. His research interests include applied computational intelligence, evolutionary computation, knowledge systems, data mining, semantic web, and ontologies.

Dr. Aljarah is an Associate Professor of BIG Data Mining and Computational Intelligence at The University of Jordan--Department of Information Technology, Jordan. Currently, he is the Director Assistant to International Affairs Unit at The University of Jordan. He obtained the bachelor degree in computer science from the Yarmouk University, Jordan, 2003. He also obtained his master degree in computer science and information systems from the Jordan University of Science and Technology, Jordan, in 2006. He participated in many conferences in the fields of data mining, machine learning, and big data such as CEC, GECCO, NTIT, CSIT, IEEE NABIC, CASON, and BigData Congress. Furthermore, he contributed in many projects in USA such as Vehicle Class Detection System (VCDS), Pavement Analysis Via Vehicle Electronic Telemetry (PAVVET), and Farm Cloud Storage System (CSS) projects. He has published more than 35 papers in refereed international conferences and journals. His research focuses on data mining, machine learning, big data, MapReduce, Hadoop, swarm intelligence, evolutionary computation, social network analysis (SNA), and large-scale distributed algorithms.