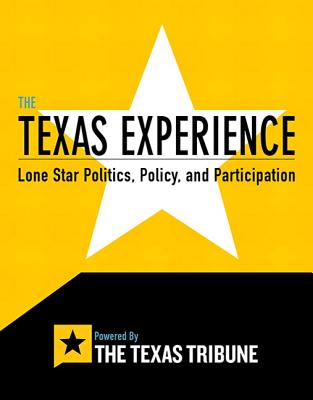 For courses in Texas Government Government, the Texas way
Revel(TM) The Texas Experience: Lone Star Politics, Policy, and Participation brings the fast-paced, ever-changing world of Texas law, leadership, and politics to life. Created in partnership with award-winning, digital-first media organization The Texas Tribune -- and available via mobile app for anywhere, anytime learning -- The Texas Experience is designed to help make sure the next generation of Texas voters is informed, educated, and civically engaged. Contemporary videos, data-rich interactives, and news stories embedded directly within the author-driven narrative promote informed civic engagement, increased voter participation, and greater accountability to policy and government. From Lyndon Johnson to the Bush Dynasty to the events that are unfolding today, Texas has literally defined American government. It's time your students help define Texas government.
Revel is Pearson's newest way of delivering our respected content. Fully digital and highly engaging, Revel replaces the textbook and gives students everything they need for the course. Informed by extensive research on how people read, think, and learn, Revel is an interactive learning environment that enables students to read, practice, and study in one continuous experience -- for less than the cost of a traditional textbook.
NOTE: Revel is a fully digital delivery of Pearson content. This ISBN is for the standalone Revel access card. In addition to this access card, you will need a course invite link, provided by your instructor, to register for and use Revel.

The Texas Tribune is the only member-supported, digital-first, nonpartisan media organization that informs Texans -- and engages with them -- about public policy, politics, government, and statewide issues. The Tribune was founded by John Thornton (a venture capitalist in Austin for nearly 20 years and a passionate believer in public media), Evan Smith (the veteran editor-in-chief of Texas Monthly and host of a weekly interview program on PBS stations), and Ross Ramsey (former owner and editor of Texas Weekly, the state's premier newsletter on politics and government, now rebranded as The Blast). The Texas Tribune and its destination website were launched in November 2009. Now with a staff of nearly 70 dedicated reporters, editors, technologists, designers and business leaders, the Tribune has continued to advance its mission of bringing greater transparency and accountability to public policy, politics, and government through news, data, and events. Paul Benson has taught at Tarrant County College NW for thirty years. He has served as faculty association president and is currently department chair. He has a background in journalism and is a presenter at social science conferences. He is the commissioner of two fantasy football leagues. Tony Giardino is a 30-year veteran of the law enforcement community and is currently assigned to the professional standards detail. Aside from teaching Texas Government for more than 20 years, he is a senior instructor for several police academies. He is an eight-time recipient of the Nick Fowler Award for excellence in teaching and he serves as an assessor for the Texas Police Chiefs Association.