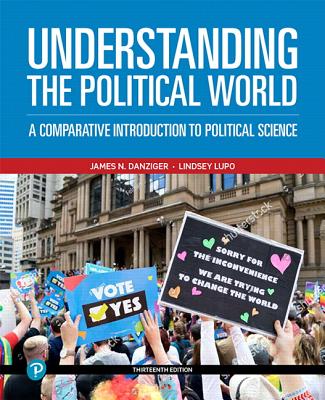 For courses in Introduction to Political Science Grasp the ever-changing nature of politics around the world
Revel(TM) Understanding the Political World gives students deeper insight into the continually evolving nature of international politics. Exploring the subject matter from a comprehensive and comparative standpoint, authors James Danziger and Lindsey Lupo use real examples from different international political systems to demonstrate how politics are understood throughout the world. By prompting students to explain what they know, the authors bring abstract political concepts into focus by connecting them to students' lives. In order to provide a contemporary view of global politics, the 13th Edition has been updated with the latest data and information, as well as a reformulated final chapter that analyzes partially developed countries such as Indonesia and Saudi Arabia. Revel is Pearson's newest way of delivering our respected content. Fully digital and highly engaging, Revel replaces the textbook and gives students everything they need for the course. Informed by extensive research on how people read, think, and learn, Revel is an interactive learning environment that enables students to read, practice, and study in one continuous experience -- for less than the cost of a traditional textbook.
NOTE: Revel is a fully digital delivery of Pearson content. This ISBN is for the standalone Revel access card. In addition to this access card, you will need a course invite link, provided by your instructor, to register for and use Revel.

James N. Danziger is a Research Professor of Political Science at the University of California, Irvine, where he also has served as Chair of the Department of Political Science, campus-wide Dean of Undergraduate Education, and Chair of the Academic Senate. He has received many honors and awards, including a Marshall Scholarship (to Great Britain), a Foreign Area Fellowship, a Woodrow Wilson Fellowship, Phi Beta Kappa, and an IBM Faculty Award. He received the first UC Irvine Distinguished Faculty Lectureship Award for Teaching in 1987, the UC, Irvine Distinguished Service Award in 1997, and the highest honor on the campus, the Extraordinarius Award, in 2009. His Ph.D. is from Stanford University, and he has held visiting appointments at the universities of Aarhus (Denmark), Pittsburgh, and Virginia. His research has received awards from the American Political Science Association and the American Society for Public Administration. He has published extensively, particularly on information technology and politics, and is an active participant in local politics. Lindsey Lupo is a professor of political science and chair of the Department of History and Political Science at Point Loma Nazarene University. She received her B.A. in Political Science from the University of California, Santa Barbara; M.A. in Social Science from the University of California, Irvine; and Ph.D. in Political Science from the University of California, Irvine. Her fields of research are urban politics, social movements, democratization, and political violence, and she is the author of Flak-Catchers: One Hundred Years of Riot Commission Politics, as well as a number of academic journal articles and book chapters. She teaches classes on urban politics, protests and social movements, comparative politics, U.S. public policy, democratization, research methods, and introduction to political science. She frequently travels with students, including to South Africa, Czech Republic, and Washington, DC. She is also the director of the Institute of Politics and Public Service at PLNU, and she manages the internship program for international studies and political science students.