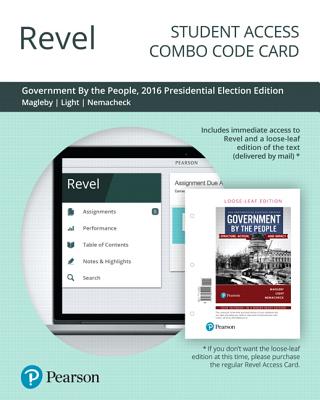 Explore American politics through the Constitution
Revel(TM) Government by the People provides a thorough, Constitution-based introduction to the foundational principles, processes, and institutions of American government. Throughout, authors David Magleby, Paul Light, and Christine Nemacheck highlight the central role that people play in a constitutional democracy, inspiring students to see how similarities and differences in political beliefs continue to shape government to this day. In order to boost student engagement with key concepts, the 2016 Presidential Election Edition incorporates coverage of contemporary issues that dominate today's headlines, as well as the most up-to-date data. Revel is Pearson's newest way of delivering our respected content. Fully digital and highly engaging, Revel replaces the textbook and gives students everything they need for the course. Informed by extensive research on how people read, think, and learn, Revel is an interactive learning environment that enables students to read, practice, and study in one continuous experience - for less than the cost of a traditional textbook. NOTE: This Revel Combo Access pack includes a Revel access code plus a loose-leaf print reference (delivered by mail) to complement your Revel experience. In addition to this access code, you will need a course invite link, provided by your instructor, to register for and use Revel.

David B. Magleby is a Distinguished Professor of Political Science at Brigham Young University (BYU). He has been an American Political Science Association Congressional Fellow as well as a Fulbright Scholar. He is recognized for his expertise on direct democracy, voting behavior, and campaign finance. Dave is also the recipient of many teaching awards, including the 1990 Utah Professor of the Year Award, the 2001 Rowman & Littlefield Award for Innovative Teaching in Political Science, and several department and university awards. He served as president of Pi Sigma Alpha, the political science honor society. Paul C. Light is the Paulette Goddard Professor of Public Service at New York University's Wagner School of Public Service and the founding principal investigator for the Global Center for Public Service. In 2015 he received the American Political Science Association John Gaus Award for exemplary scholarship in Political Science and Public Administration. He has worked on Capitol Hill as a senior committee staffer in the U.S. Senate and as an American Political Science Association Congressional Fellow in the U.S. House of Representatives. Paul is the founding director of the Brookings Institution's Center for Public Service and continues his research on how to invite Americans to serve their communities through public service. Christine L. Nemacheck is the Wilson & Martha Claiborne Stephens Associate Professor of Government and is a Fellow with the Center for the Liberal Arts at The College of William & Mary. Her research focuses on judicial selection and the role of the courts in a separation of powers system. Chris has received a number of awards for her teaching and research activity, including the Alumni Fellowship Award for excellence in teaching at The College of William & Mary. She is the former co-editor of the Pi Sigma Alpha Undergraduate Journal of Politics.