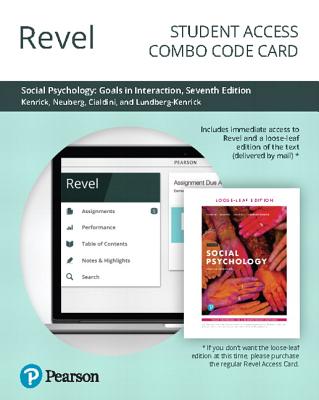 For courses in Social Psychology An integrative approach highlights the relevance of social psychology to students' lives
Revel(TM) Social Psychology: Goals in Interaction shows how human social behaviors are woven together in related, interconnected patterns. Integrating applications and methods throughout the text, authors Douglas Kenrick, Steven Neuberg, Robert Cialdini, and David Lundberg-Kenrick prompt students to consider personal and situational factors, as well as the interactions among these factors, when analyzing human behavior. The 7th Edition offers updated research in the field as well as coverage of contemporary topics, many relating to how technology affects the way people interact, to emphasize the relevance of the discipline to students today. Revel is Pearson's newest way of delivering our respected content. Fully digital and highly engaging, Revel replaces the textbook and gives students everything they need for the course. Informed by extensive research on how people read, think, and learn, Revel is an interactive learning environment that enables students to read, practice, and study in one continuous experience -- for less than the cost of a traditional textbook.
NOTE: This Revel Combo Access pack includes a Revel access code plus a loose-leaf print reference (delivered by mail) to complement your Revel experience. In addition to this access code, you will need a course invite link, provided by your instructor, to register for and use Revel.

Douglas T. Kenrick is a professor at Arizona State University (ASU). He received his B.A. from Dowling College and his Ph.D. from Arizona State University. He taught at Montana State University for four years before returning to ASU. His research has been published in a number of prestigious outlets, including Psychological Review, Behavioral and Brain Sciences, American Psychologist, Handbook of Social Psychology, Journal of Personality and Social Psychology, Current Directions in Psychological Science, Perspectives on Psychological Science, and Personality and Social Psychology Review. He is the author of the 2011 book Sex, Murder, and the Meaning of Life: A Psychologist Investigates How Evolution, Cognition, and Complexity Are Revolutionizing Our View of Human Nature, and in 2013, with Vlad Griskevicius, he wrote The Rational Animal: How Evolution Made Us Smarter Than We Think. He has also published articles in the New York Times and Scientific American magazine. He has taught a graduate course on teaching psychology, and he thoroughly enjoys teaching undergraduate sections of social psychology, for which he has won several teaching awards. Steven L. Neuberg is Foundation Professor of Psychology at Arizona State University. He received his undergraduate degree from Cornell University and his graduate degrees from Carnegie-Mellon University. He spent a postdoctoral year at the University of Waterloo in Canada and has since taught at ASU. Neuberg's research has been published in outlets such as Advances in Experimental Social Psychology, Journal of Personality and Social Psychology, Psychological Science, Handbook of Social Psychology, and Perspectives on Psychological Science, and has been supported by the National Institute of Mental Health and the National Science Foundation. He has received a half dozen teaching honors, including his college's Outstanding Teaching Award and the ASU Honors College Outstanding Honors Disciplinary Faculty Award. He has served on federal grant review panels and as associate editor of the Journal of Experimental Social Psychology and teaches a graduate course on teaching social psychology. Robert B. Cialdini is Regents' Professor Emeritus at Arizona State University, where he has also been named Graduate Distinguished Professor. He received his undergraduate degree from the University of Wisconsin and his graduate degrees from the University of North Carolina. He is a past president of the Society of Personality and Social Psychology and has received the Society's award for Distinguished Scientific Contributions. His research has appeared in numerous publications, including Handbook of Social Psychology, Advances in Experimental Social Psychology, and Journal of Personality and Social Psychology. His book, Influence: Science and Practice, has sold over two million copies and has appeared in 28 languages. David Lundberg-Kenrick is media outreach manager for the ASU psychology department, which involves filming psychologists discussing the implications of their research for careers, families, and other aspects of everyday life. He received a B.F.A. from New York University's Tisch School of the Arts, where he won a Wasserman Production Award. For the past 12 years he has worked as an animator, video editor, and video producer. Dave has over a decade of experience editing videos for various companies, including Pearson Education, Axiom Media Productions, and Arizona State University. He has shot footage for various documentaries and television shows on the BBC, the Discovery Channel, and SBS Australia. Dave was brought in to help the transition from the old paper textbook format to the new interactive electronic format. He produced the short research videos found throughout the new edition, in which active researchers from around the world share their findings in a lively animated format.