The Collected Works of Alonzo Church 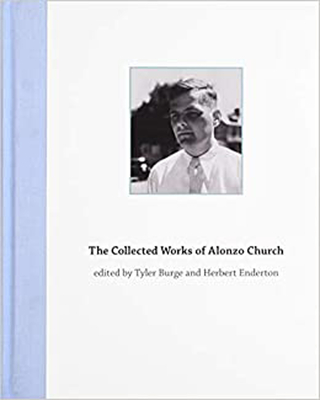 Writings, including articles, letters, and unpublished work, by one of the twentieth century's most influential figures in mathematical logic and philosophy.

Alonzo Church's long and distinguished career in mathematics and philosophy can be traced through his influential and wide-ranging writings. Church published his first article as an undergraduate at Princeton in 1924 and his last shortly before his death in 1995. This volume collects all of his published articles, many of his reviews, his monograph The Calculi of Lambda-Conversion, the introduction to his important and authoritative textbook Introduction to Mathematical Logic, a substantial amount of previously unpublished work (including chapters for the unfinished second volume of Introduction to Mathematical Logic), and a selection of letters to such correspondents as Rudolf Carnap and W. V. O. Quine. With the exception of the reviews, letters, and unpublished work, these appear in chronological order, for the most part in the format in which they were originally published.

Church's work in calculability, especially the monograph on the lambda-calculus, helped lay the foundation for theoretical computer science; it attracted the interest of Alan Turing, who later completed his PhD under Church's supervision. (Church coined the term "Turing machine" in a review.) Church's influential textbook, still in print, defined the field of mathematical logic for a generation of logicians. In addition, his close connection with the Association for Symbolic Logic and his many years as review editor for the Journal of Symbolic Logic are documented in the reviews included here.