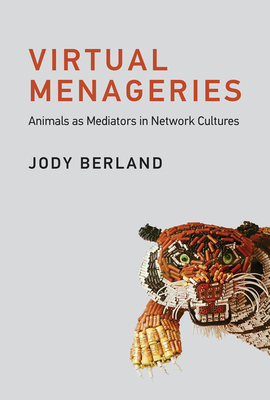 The close interdependency of animal emissaries and new media from early European colonial encounters with the exotic to today's proliferation of animals in digital networks.

From cat videos to corporate logos, digital screens and spaces are crowded with animal bodies. In Virtual Menageries, Jody Berland examines the role of animals in the spread of global communications. Her richly illustrated study links the contemporary proliferation of animals on social media to the collection of exotic animals in the formative years of transcontinental exploration and expansion. By tracing previously unseen parallels across the history of exotic and digital menageries, Berland shows how and why animals came to bridge peoples, territories, and technologies in the expansion of colonial and capitalist cultures.

Berland's genealogy of the virtual menagerie begins in 1414 when a ruler in Bengal sent a Kenyan giraffe to join a Chinese emperor's menagerie. It maps the beaver's role in the colonial conquest of Canada and examines the appearances of animals in early moving pictures. The menagerie is reinvented for the digital age when image and sound designers use parts or images of animals to ensure the affective promise and commercial spread of an emergent digital infrastructure. These animal images are emissaries that enliven and domesticate the ever-expanding field of mediation. Virtual Menageries offers a unique account of animals and animal images as mediators that encourage complicated emotional, economic, and aesthetic investment in changing practices of connection.