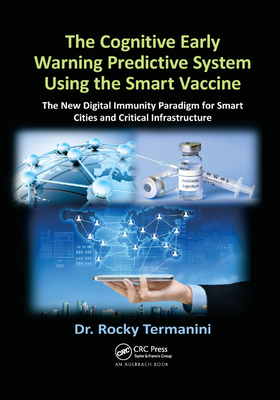 Here's an interesting revelation ... during the plague of Athens in 430 BC, the Greeks realized that people who had previously survived smallpox did not contract the disease a second time. In fact, these survivors were often called upon to attend to those afflicted with smallpox. Consider this book as the continuum of the Immunization legacy as applied to the digital world.

The business of attack-as-a-service (AaaS) is real and is not going away any time soon. The Russians and Chinese have recently been suspected of providing AaaS to nefarious organizations. This book offers the most innovative solution to this critical issue. The Cognitive Early Warning Predictive System (CEWPS(TM)) described in the book replicates the human immune system and creates its counterpart, "the digital immune system". A CEWPS inoculates critical systems with vaccination as a service (VaaS). This is achieved through its Smart Vaccine(TM), the holy grail of digital immunity. From the CEWPS arsenal, the early warning predictive component is the intelligent and self-trained AI reasoning engine that acquires knowledge from past attacks and predicts, probable incoming cyberattacks. The Cognitive Early Warning Predictive System Using the Smart Vaccine discusses asymmetric cyber warfare, the vulnerabilities of critical infrastructure, and the shortcomings of the anti-virus technologies. Next, it describes the enabling technologies required to build a "Digital Immune System." CEWPS is the new paradigm that extends the continuum of cyber security. This book includes vivid attack scenarios on some major infrastructures and describes how CEWPS is used to deter and annihilate the attacks.

Dr. Rocky Termanini, CEO of MERIT CyberSecurity Group, is a subject matter expert in IT security and brings 46 years of cross-industry experience at national and international levels. He is the designer of the "Cognitive Early-Warning Predictive System" and "The Smart Vaccine(TM)" which replicates the human immune system to protect the critical infrastructures against future cyber wars.