Millimeter Wave Antennas for 5G Mobile Terminals and Base Stations 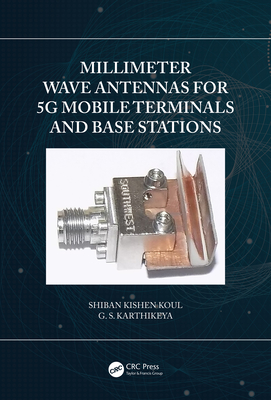 This book discusses antenna designs for handheld devices as well as base stations. The book serves as a reference and a handy guide for graduate students and PhD students involved in the field of millimeter wave antenna design. It also gives insights to designers and practicing engineers who are actively engaged in design of antennas for future 5G devices. It offers an in-depth study, performance analysis and extensive characterization of novel antennas for 5G applications. The reader will learn about basic design methodology and techniques to develop antennas for 5G applications including concepts of path loss compensation, co-design of commercial 4G antennas with millimeter wave 5G antennas and antennas used in phase array and pattern diversity modules. Practical examples included in the book will help readers to build high performance antennas for 5G subsystems/systems using low cost technology.

Provides simple design methodology of different antennas for handheld devices as well as base stations for 5G applications.
Concept of path loss compensation introduced.
Co-design of commercial 4G antennas with millimetre wave 5G antennas presented.
Comparison of phased array versus pattern diversity modules discussed in detail.
Fabrication and Measurement challenges at mmWaves and Research Avenues in antenna designs for 5G and beyond presented.

earned a BE degree in electrical engineering

from the Regional Engineering College, Srinagar, Jammu and

Kashmir, India, in 1977; an MTech in radar and communication

1983 at the Indian Institute of Technology (IIT), Delhi. He served

2018 at the IIT Delhi. He is presently the Deputy Director (Strategy

& Planning and International Affairs) at the Indian Institute of

Technology, Jammu. He also served as the Chairman of M/S

involved in the development of RF and microwave systems

in India, from 2009 to 2019. His research interests include RF MEMS, high frequency wireless

including antennas. He has successfully completed 36 major sponsored projects, 52 consultancy

projects and 58 technology development projects. He is author/co-author of 450

copyrights. He is a Life Fellow of the Institution of Electrical and Electronics Engineers,

USA (IEEE), Fellow of the Indian National Academy of Engineering (INAE), and Fellow of

the Institution of Electronics and Telecommunication Engineers (IETE). He is the Chief

than 280 invited technical talks at various international symposia and workshops. He

of the Sight Adhoc Committee MTT-S, and an MTT-S Speaker Bureau lecturer. He was a

distinguished microwave lecturer at IEEE MTT-S for the period 2012-2014, and a distinguished

Engineers, Calcutta (1977); the S. K. Mitra Research Award from the IETE for the best

(1994) for the development of Ka-band components and phase shifters; the Ram Lal

Wadhwa Gold Medal from the Institution of Electronics and Communication Engineers

Prakash Bhasin Award (2009) in the field of Electronics and Information Technology;

a Teaching Excellence award (2012) from IIT Delhi, an award for his contribution to the

growth of smart material technology (2012) by the ISSS, Bangalore; the Vasvik Award

(ICT); the M. N. Saha Memorial Award (2013) from the IETE for the best application-oriented

gained his undergraduate degree in electronics

and communication engineering in 2010 from the Visvesvaraya

in microwave engineering from the University of Kerala in 2012.

He worked as an Assistant Professor in Visvesvaraya Technological

University from 2013 to 2016, where he established the Antenna

Architects' lab. He joined the Centre for Applied Research in

Electronics, IIT Delhi in January 2017 and defended his thesis in

December 2019. He has authored or co-authored more than 40

He has also filed three Indian patents and two US patents. His

mmWave antennas for mobile terminals and base stations. He is a

member of the IEEE Antennas and Propagation Society, and the Antenna Test & Measurement

society. He serves as the reviewer of ACES, IEEE Access and Cambridge's IJMWT. He has

participated actively in more than 15 workshops on antennas in India and abroad.