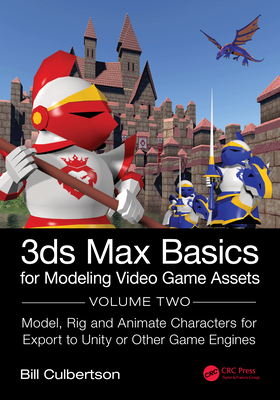 As a textbook for learning the fundamentals of modeling, rigging and animating 3D-modeled characters for use in video games, this step-by-step lesson book builds on the reader's modeling skills acquired from reading Volume I. The reader will model characters for the Castle Environment created in Volume I, which will be rigged using the Character Animation Toolkit (CAT) in 3ds Max and animated with game moves. The Skin Modifier is used for associating the meshes to the rigs and the characters are then exported to the Unity game engine and integrated into the Castle Scene with a Third Person Character camera. As the text introduces new modeling skills, it additionally calls on the reader to perform repetitive tasks, reinforcing skills learned in the process. The content is presented as if the reader is in a working video game studio, being responsible for researching asset design and providing the team with placeholder assets and final model assets that are unwrapped and custom textured using both box mapping and the 3ds Max Quick Peel tool. Although the text uses Autodesk 3ds Max for the modeling program, the principles are transferable to other major modeling programs.

As the founder of Whooplah LLC, Bill is committed to creating family-fun entertainment that helps parents meet and exceed their parenting goals. An experienced video game designer and developer, he recently released the large-scale video game environment portal, Pollywog Pond, for early learners. The game was nominated for a 2019 Kidscreen Award "Best New Video Game - Original." The game is being developed into a children's television series for national distribution, a co-production with RI PBS. A graduate of Towson University, MD, USA, Culbertson earned a Master of Art in Art Education degree from the Rhode Island School of Design, Providence, RI, USA. Commercially, he began his career at Hasbro, Inc. as an industrial designer in Research & Design. Within a short time, he was made Director of the Sculpture Department, guiding the company's popular toy lines such as G.I. Joe and My Little Pony. Moving into the freelance community, he developed a nationwide clientele including manufacturers, theme parks and cruise lines. Specializing in licensed characters, he has extensive experience working with clients such as The Walt Disney Company, Jim Henson Company, Sesame Street Workshop, Nickelodeon and others. As an inventor, he is responsible for numerous toy concepts and designs. Additionally, he has created and produced the award-winning puppet show "Li'l Rhody!" for Rhode Island PBS. As a fine artist, he has been recognized internationally for his sculptural work through numerous large-scale public art works worldwide, including most recently, a memorial to Jim Henson in Hyattsville, Maryland. He has the distinction of being named a Copley Master Artist by the Copley Society of Boston. A Professor at New England Institute of Technology, he is a faculty member of the University's nationally ranked Video Game Development and Design Department. With over 18 years of post-secondary teaching experience, his teaching emphasis is in 3D modeling, animation and game development.