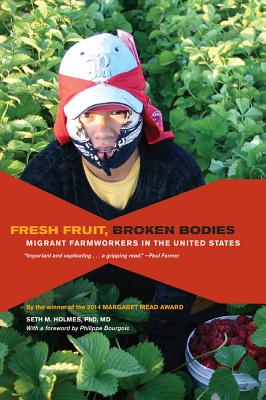 Fresh Fruit, Broken Bodies provides an intimate examination of the everyday lives and suffering of Mexican migrants in our contemporary food system. An anthropologist and MD in the mold of Paul Farmer and Didier Fassin, Holmes shows how market forces, anti-immigrant sentiment, and racism undermine health and health care. Holmes's material is visceral and powerful. He trekked with his companions illegally through the desert into Arizona and was jailed with them before they were deported. He lived with indigenous families in the mountains of Oaxaca and in farm labor camps in the U.S., planted and harvested corn, picked strawberries, and accompanied sick workers to clinics and hospitals. This "embodied anthropology" deepens our theoretical understanding of the ways in which social inequalities and suffering come to be perceived as normal and natural in society and in health care.

All of the book award money and royalties from the sales of this book have been donated to farm worker unions, farm worker organizations and farm worker projects in consultation with farm workers who appear in the book.