The Race for a New Game Machine: Creating the Chips Inside the XBox 360 and the Playstation 3 (Hardcover) 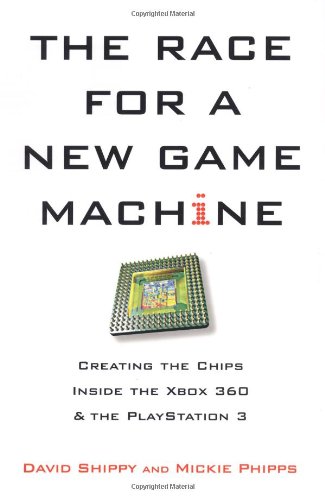 The Xbox 360 and Playstation 3 game systems have changed the face of home entertainment. But few know the amazing story inside the consoles--how David Shippy and his team of top-notch engineers at the Sony/Toshiba/IBM Design Center (STI) forged the tiny miracle at the core of it all: a revolutionary microprocessor chip that set a new paradigm in personal computing. It's a thrilling, all-or-nothing race to deliver the industry's fastest chip in record time. At stake were the livelihoods--and sanity--of an unsung group of tireless visionaries. At war were the giants Microsoft and Sony.

The tough road to market started in 2001 when Shippy assembled the talent to design the chip for Sony's hotly anticipated PlayStation 3 game console, planned for a late 2005 release. In 2003, a gigantic wrench was thrown into the operation in the form of Microsoft--the software behemoth wanted the STI team's microprocessor for its own Xbox 360 and targeted Christmas, 2005, as well. As they desperately served two masters, balancing Microsoft's "victory or death" attitude and Sony's slow patience and caution, Shippy and his team endured 80-hour workweeks, flaring tempers, crumbled friendships, despair, and finally--triumph.

The Race For A New Game Machine is a dazzling, behind-the-scenes account of life in the tech world, featuring memorable characters, high-level corporate intrigue, and cutthroat business dealings. Driving the technical accomplishment was the bold vision that inspired the designers at STI, and throughout the book David Shippy and Mickie Phipps reveal the leadership lessons they drew from this experience, including team motivation, fostering innovation, and demanding hard work while encouraging fun.

My team and I had worked tirelessly at IBM for two and a half years, breathing life into the Sony PlayStation 3 "Cell" central processing chip. We ordered our lives around the idea of beating Microsoft to market with a Christmas launch.

"How did this happen?" I grumbled through gritted teeth.

"Let's just say it was a blockbuster, an offer IBM couldn't refuse," he answered. Over a billion dollars were involved, spanning the entire spectrum from development to chip manufacturing.

"There's more," Akrout said. "Microsoft wants something very similar to what you designed for Sony but with some unique enhancements, and they want it on the same schedule." He then described the design changes Microsoft needed for a super-aggressive, market-shaking Christmas launch.

Akrout didn't blink. It took me a second, but I got the message.

My goals were very clear when I joined IBM in the mid 1980s. I wanted cutting-edge microprocessor design projects that really pushed the state of the art. I wanted to lead design teams and leave my mark on the industry. This vision was the focal point of my whole career. Akrout handed me one of the top technology leadership positions in the entire industry and at that moment, I saw the top of the mountain, everything I wanted. Would I have to stake my claim by screwing Sony and extending Microsoft's dominance of digital life? Or could I help them both succeed?