There Are No Electrons: Electronics for Earthlings (Paperback) 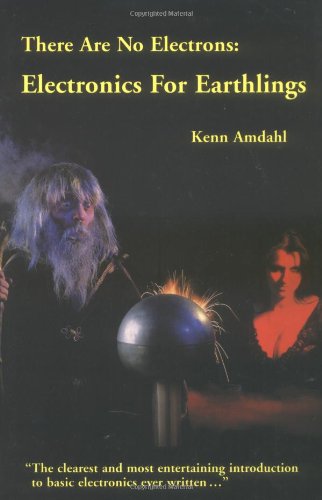 An off-beat introduction to the workings of electricity for people who wish Richard Brautigan and Kurt Vonnegut had teamed up to explain inductance and capacitance to them. Despite its title, it's not wild ranting pseudo-science to be dismissed by those with brains. Rather, Amdahl maintains that one need not understand quantum physics to grasp how electricity works in practical applications. To understand your toaster or your fax machine, it doesn't really matter whether there are electrons or not, and it's a lot easier and more fun to start with the toaster than with quarks and calculus. The book is mildly weird, often funny, always clear and easy to understand. It assumes the reader doesn't know a volt from a hole in the ground and gently leads him or her through integrated circuits, radio, oscillators and the basics of the digital revolution using examples that include green buffalo, microscopic beer parties, break-dancing chickens and naked Norwegian girls in rowboats. OK, it's more than mildly weird.

The book has been reprinted numerous times since 1991 and has achieved minor cult status. Reviewed and praised in dozens of electronics and educational magazines, it is used as a text by major corporations, colleges, high schools, military schools and trade schools. It has been studied by education programs at colleges across the United States. This book was making wise cracks in the corner before anyone thought of designing books for dummies and idiots; some say it helped to inspire that industry.

It may be the only "introduction to electronics books" with back cover comments by Dave Barry, Ray Bradbury, Clive Cussler, and George Garrett, as well as recomendations from Robert Hazen, Bob Mostafapour, Dr. Roger Young, Dr. Wayne Green, Scott Rundle, Brian Battles, Michelle Guido, Herb Reichert and Emil Venere. As Monitoring Times said, "Perhaps the best electronics book ever. If you'd like to learn about basic electronics but haven't been able to pull it off, get There Are No Electrons. Just trust us. Get the book."