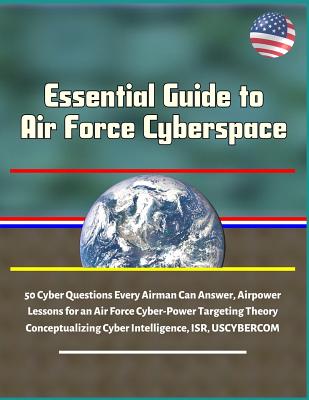 This unique book reproduces four important government documents and reports dealing with the scientific and technical angle of flying, fighting and winning in cyberspace. The four books: 50 Cyber Questions Every Airman Can Answer, Airpower Lessons for an Air Force Cyber-Power Targeting Theory, For and from Cyberspace - Conceptualizing Cyber Intelligence, Surveillance, and Reconnaissance, and USCYBERCOM.What is Cyberspace? Author William Gibson coined the term cyberspace by combining cybernetics and space into the term cyberspace in his 1982 story "Burning Chrome" and popularized it is his 1984 novel Neuromancer. Gibson described cyberspace as "a consensual hallucination experienced daily by billions... A graphic representation of data abstracted from banks of every computer in the human system. Unthinkable complexity. Lines of light ranged in the non-space of the mind, clusters and constellations of data."In the minds of many, cyberspace became synonymous to the Internet. In September 2006, the Joint Chiefs of Staff endorsed a definition of cyberspace as "a domain characterized by the use of electronics and the electromagnetic spectrum to store, modify and exchange data via networked systems and associated physical infrastructures." We dissect this definition to derive the scientific basis of its intent. The word "domain" instead of "environment" carries legal implications under the laws of armed conflict. "Electronics and the electromagnetic spectrum" refer to the wave-particle duality of radiation which, when modulated with information, creates a signal. "Data and networked systems" refer to digital information and application programs, and the computers and networks on which they exist, in other words data and applications, at rest and in motion. For warfare purposes, we derive a working definition of cyberspace as "a domain in which signals hold at risk intelligent systems." This definition recognizes three components to cyberspace: (1) the "effectors" encompass a broad range of signal-borne threats, analog and digital; (2) the "medium" enables effectors to access the targets, wired and wireless, hardware and software; and (3) the "targets" include weapons and systems that use computers or networks.