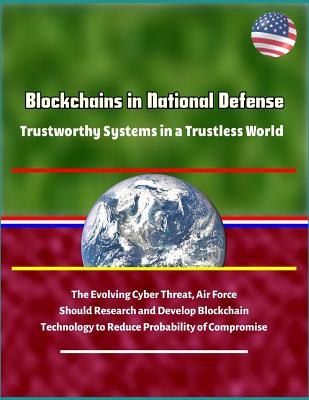 The ability of the USAF to prevail in the highly contested environment of 2040 will be dictated by its ability to defend cyber-enabled systems, and the data within them, from compromise and manipulation. Yet contemporary cyber defense is faltering, and incremental improvements seem unlikely to overcome an exponentially growing cyber threat. Thus, an entirely new model for cyber defense strategy is needed. Blockchains are a new information technology that inverts the cyber security paradigm. First, blockchain networks are trustless; they assume compromise of the network by both insiders and outsiders. Second, blockchains are transparently secure; they do not rely on failure-prone secrets, but rather on a cryptographic data structure that makes tampering both exceptionally difficult and immediately obvious. Finally, blockchains networks are fault tolerant; they align the efforts of honest nodes to reject those that are dishonest. As a result, blockchain networks not only reduce the probability of compromise, but also impose significantly greater costs on an adversary to achieve it. The Air Force should research and develop blockchain technology and leverage it for national defense.This compilation includes a reproduction of the 2019 Worldwide Threat Assessment of the U.S. Intelligence Community.The concept of data-fighting is not new. In An Organic Design for Command and Control, Boyd describes conflict as a competition of OODA loops, with victory favoring the actor that can execute OODA cycles faster and with less internal friction than an adversary. While Boyd's model espouses the benefits of injecting friction into an adversary's decision process, it also promotes the benefit of making one's own process resilient to hostile action. The concept of data-fighting can also be related to the doctrine of counterair, which Air Force Doctrine Annex 3-01 defines as "the integration of offensive and defensive operations to attain and maintain a desired degree of control of the air and protection by neutralizing or destroying enemy aircraft and missiles." Similarly, data-fighting could be described as the integration of offensive and defensive operations to attain and maintain a desired degree of control of the ability to generate, store, disseminate, process, analyze, and exploit information and protection by neutralizing the enemy's interfering action. Counterair's concept of control, which "describes a level of influence in a] domain relative to that of an adversary," has important implications for data-fighting.4 Control exists on a spectrum ranging from parity in the center to superiority and supremacy by either belligerent at the extreme. Thus, in data-fighting, until an adversary achieves supremacy an actor retains some ability to data-fight.