Surface Science and Adhesion in Cosmetics 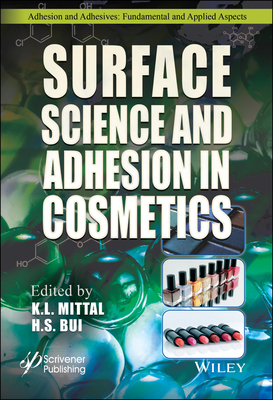 Kashmiri Lal Mittal was employed by the IBM Corporation from 1972 through 1993. Currently, he is teaching and consulting worldwide in the broad areas of adhesion as well as surface cleaning. He has received numerous awards and honors including the title of doctor honoris causa from Maria Curie-Sklodowska University, Lubin, Poland. He is the editor of more than 130 books dealing with adhesion measurement, adhesion of polymeric coatings, polymer surfaces, adhesive joints, adhesion promoters, thin films, polyimides, surface modification surface cleaning, and surfactants. Dr. Mittal is also the Founding Editor of the journal Reviews of Adhesion and Adhesives.

Hy Si Bui obtained his BS degrees in Physics, Mathematics and Polymer Science at the University of Southern Mississippi, MS in Colloids, Polymers & Surfaces, and PhD in Chemistry at Carnegie Mellon University. He was an Coating chemist at Bayer Corporation (Covestro) and was a recipient of the Presidential Green Chemistry Challenge Award in 2000 for Two-Component Waterborne Polyurethane Coatings. He has been at L'OREAL USA for 16 years and is currently a Sr. Principal Scientist and Sr. L'OREAL Expert in Cosmetic Application Domain. He has contributed to the launch of more than 45 cosmetic products to the market and obtained 108 granted US patents and 70 pre-granted patents.