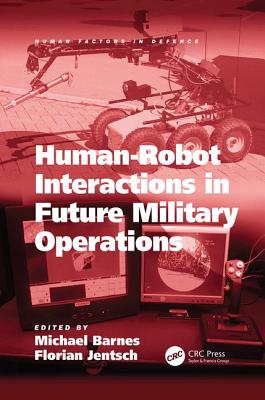 Soldier-robot teams will be an important component of future battle spaces, creating a complex but potentially more survivable and effective combat force. The complexity of the battlefield of the future presents its own problems. The variety of robotic systems and the almost infinite number of possible military missions create a dilemma for researchers who wish to predict human-robot interactions (HRI) performance in future environments. Human-Robot Interactions in Future Military Operations provides an opportunity for scientists investigating military issues related to HRI to present their results cohesively within a single volume. The issues range from operators interacting with small ground robots and aerial vehicles to supervising large, near-autonomous vehicles capable of intelligent battlefield behaviors. The ability of the human to 'team' with intelligent unmanned systems in such environments is the focus of the volume. As such, chapters are written by recognized leaders within their disciplines and they discuss their research in the context of a broad-based approach. Therefore the book allows researchers from differing disciplines to be brought up to date on both theoretical and methodological issues surrounding human-robot interaction in military environments. The overall objective of this volume is to illuminate the challenges and potential solutions for military HRI through discussion of the many approaches that have been utilized in order to converge on a better understanding of this relatively complex concept. It should be noted that many of these issues will generalize to civilian applications as robotic technology matures. An important outcome is the focus on developing general human-robot teaming principles and guidelines to help both the human factors design and training community develop a better understanding of this nascent but revolutionary technology. Much of the research within the book is based on the Human Research and Engineering Directorate (HRED), U.S. Army Research Laboratory (ARL) 5-year Army Technology Objective (ATO) research program. The program addressed HRI and teaming for both aerial and ground robotic assets in conjunction with the U.S. Army Tank and Automotive Research and Development Center (TARDEC) and the Aviation and Missile Development Center (AMRDEC) The purpose of the program was to understand HRI issues in order to develop and evaluate technologies to improve HRI battlefield performance for Future Combat Systems (FCS). The work within this volume goes beyond the research results to encapsulate the ATO's findings and discuss them in a broader context in order to understand both their military and civilian implications. For this reason, scientists conducting related research have contributed additional chapters to widen the scope of the original research boundaries.

Michael Barnes is a Research Psychologist with the US Army Research Laboratory (ARL). For the past five years, he was the lead for the human robotic interaction (HRI) program that included both military and university research as part of an Army Technology Objective: Robotic Collaboration. His past experience includes tenure with the US Navy and as a human factors manager with General Electric. Also, he has served on a number of international committees related to HRI. He has authored or co-authored over 60 articles on the human element of military systems. Located at Ft. Huachuca, AZ, his research interests include investigations of risk visualization, intelligence processes and unmanned aerial vehicles crew systems. Florian Jentsch, Ph.D., is an Associate Professor at the University of Central Florida, Orlando, with joint appointments in the Department of Psychology and the Institute for Simulation & Training. He is also the Director of the Team Performance Laboratory. He received his Ph.D. in Human Factors Psychology in 1997, and he holds master's degrees in aeronautical science and aeronautical engineering. Dr. Jentsch is associate editor for Human Factors and for Cognitive Technology, and consulting editor for the International Journal of Applied Aviation Studies. His research interests are in team performance and training, pilot training and performance, human-robot interaction, and simulation methodology. Dr. Jentsch has co-authored over 200 publications and presentations; this is his second edited book.