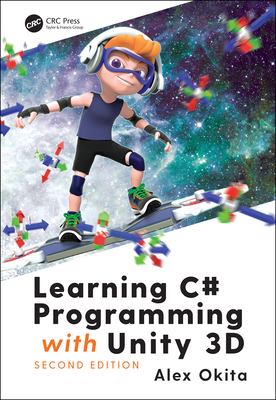 Learning C# Programming with Unity 3D, Second Edition is for the novice game programmer without any prior programming experience. Readers will learn how C# is used to make a game in Unity 3D. Many example projects provide working code to learn from and experiment with. As C# evolves, Unity 3D evolves along with it. Many new features and aspects of C# are included and explained. Common programming tasks are taught by way of making working game mechanics. The reader will understand how to read and apply C# in Unity 3D and apply that knowledge to other development environments that use C#. New to this edition: includes latest C# language features and useful tools included with the .NET library like LINQ, Local Functions Tuples, and more

Alex Okita has over 20 years of experience in game development. His recent work includes many VR and AR games using Unity 3D. Having started in the industry as a Concept Artist for Bungie, he transitioned to a technical artist working in Film and other AAA game companies. Eventually work led him to programming in languages like the Maya Embedded Language (MEL), Python, and Unreal Script. Eventually C# and Unity 3D became his main development environment where he felt a need to help others realize their own game development ideas.