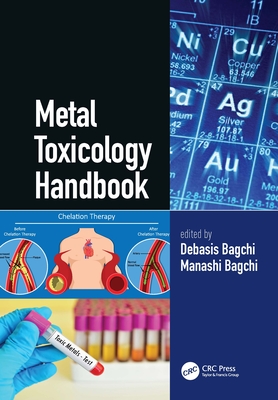 Heavy metals and metalloids, singly or in combination, induce toxic manifestations either through acute or chronic pathology. In particular, long-term chronic exposure to diverse heavy metals and metalloids to humans and animals can lead to numerous physical, muscular, neurological, nephrological, and diverse degenerative diseases and dysfunctions, including multiple sclerosis, muscular dystrophy, Parkinson's and Alzheimer's diseases, cardiovascular disorders, and several others.

Recognized heavy metals such as lead, mercury, arsenic, cadmium, thallium, and hexavalent chromium are known for enormous toxicity. The immediate vital signs of acute heavy metal exposure include nausea, vomiting, diarrhea, and acute abdominal pain. Mercury has been identified as the most toxic heavy metal, and mercury poisoning is known as acrodynia or pink disease. Similarly, lead, another toxic heavy metal, was at one time an integral part of painting.

further explains and discusses the varying attributes of metals, discussing toxicity, safety, and proper human utilization of metals. Beginning with a broad overview of metals, metalloids, redox biology, and neurodegeneration and going further into the roles, benefits, and toxicity of metals with each section, the text contains 28 chapters from eminent researchers and scientists in their respective fields and is a must-have for anyone researching the potential toxicity in metals.

The initial introductory section provides a broad overview of metals, metalloids, redox biology, and neurodegeneration. The second section discusses the pathology of metal toxicity in two chapters, while the third section highlights the mechanism and salient features of restoring metabolic homeostasis in two chapters. The fourth section demonstrates the aspect of radionuclides toxicity. In a change of pace, the fifth section discusses the benefits of metals in four chapters. The sixth section, titled "Toxic Manifestations by Diverse Heavy Metals and Metalloids," provides fourteen chapters that discuss the toxicological mechanism and manifestation of individual metals.

The editors have crafted a commentary titled "A Treatise on Metal Toxicity" and summarized a vivid scenario of metal toxicity and its consequences.

Debasis Bagchi, PhD, MACN, CNS, MAIChE, received his PhD in medicinal chemistry in 1982. He is the Director of Scientific Affairs, VNI, Inc., Lederach, Pennsylvania; an Adjunct Faculty at Texas Southern University, Houston, Texas and a past Faculty in the Department of Pharmacological and Pharmaceutical Sciences at the University of Houston College of Pharmacy, Houston, Texas. He served as the Chief Scientific Officer at Cepham, Inc., Belmont, New Jersey, from June 2013 through December 2018. He was the Senior Vice President of Research and Development of InterHealth Nutraceuticals, Inc., Benicia, California, from 1998 until February 2011, and then as the Director of Innovation and Clinical Affairs of Iovate Health Sciences, Oakville, Ontario, Canada, until June 2013. Dr Bagchi received the Master of American College of Nutrition Award in October 2010. He is the Past Chairman of International Society of Nutraceuticals and Functional Foods (ISNFF), Past President of American College of Nutrition, Clearwater, Florida, and Past Chair of the Nutraceuticals and Functional Foods Division of Institute of Food Technologists (IFT), Chicago, Illinois. He is serving as a Distinguished Advisor at the Japanese Institute for Health Food Standards (JIHFS), Tokyo, Japan. He is a Member of the Study Section and Peer Review Committee of the National Institutes of Health (NIH), Bethesda, Maryland. He has published 372 papers in peer-reviewed journals, has written 41 books, and has 20 patents. He is also a Member of the Society of Toxicology, Member of the New York Academy of Sciences, Fellow of the Nutrition Research Academy, and Member of the TCE stakeholder Committee of the Wright-Patterson Air Force Base, Ohio. He is the Associate Editor of the Journal of Functional Foods, Journal of the American College of Nutrition, and Archives of Medical and Biomedical Research, and he also serves as an Editorial Board Member of numerous peer-reviewed journals, including Antioxidants and Redox Signaling, Cancer Letters, Food and Nutrition Research, Toxicology Mechanisms and Methods, The Original Internist, and other peer-reviewed journals.

PhD, FACN, received her PhD in chemistry in 1984. She is currently the Chief Scientific Officer of Dr. Herbs LLC, Concord, California. She is also a Consultant for VNI, Lederach, Pennsylvania. She served as an Associate Professor at the Creighton University School of Pharmacy and Allied Health Profession, Omaha, Nebraska, from September 1990 until August 1999. Later, she served as the Director of Research at InterHealth Nutraceuticals, Benicia, California, from September 1999 to July 2009. She is a Member of the Study Section and Peer Review Committee of the National Institutes of Health (NIH), Bethesda, Maryland. Her research interests include free radicals, human diseases, toxicology, carcinogenesis, anti-aging and anti-inflammatory pathophysiology, mechanistic aspects of cytoprotection by antioxidants and chemoprotectants, regulatory pathways in obesity and gene expression, diabetes, arthritis, and efficacy and safety of natural botanical products and dietary supplements. She is a Member of the Society of Toxicology (Reston, Virginia), the New York Academy of Sciences (New York, New York), and the Institutes of Food Technologists (Chicago, Illinois). She is a Fellow and currently Board Member of the American College of Nutrition (Clearwater, Florida). She has published 225 papers in peer-reviewed journals and 2 books, Genomics, Proteomics and Metabolomics in Nutraceuticals and Functional Foods and Bio-Nanotechnology: A Revolution in Food, Biomedical and Health Sciences, from Wiley-Blackwell. She has delivered invited lectures at various national and international scientific conferences and organized workshops and group discussion sessions. She serves as an Editorial Board Member of the Journal of the American College of Nutrition, and is a reviewer of many peer-reviewed journals. She received funding from various institutions and agencies, including the U.S. Air Force Office of Scientific Research, the National Institute of Aging, the Nebraska State Department of Health, and the Cancer Society of Nebraska.

Both Dr. D. Bagchi and Dr. M. Bagchi have extensively researched diverse heavy metals and metalloids, including cadmium, chromium(III), chromium(VI), arsenic, nickel, platinum, zinc, vanadium, manganese, magnesium, bismuth, cobalt, calcium, potassium, iron, and silver since 1993 to demonstrate the diverse molecular mechanisms of toxicity as well as to explore the beneficial effects of selected metals on human health. They have published approximately 75 peer-reviewed publications and book chapters as author or co-author. Their research studies have been supported by the Biomedical Research Support Grant (BRSG), the U.S. Air Force Office of Scientific Research (AFOSR), the National Institutes of Health (NIH), the U.S. Army Medical Research Institute of Infectious Diseases (USAMRIID), the Nebraska State Department of Health, and the Procter and Gamble Company (P&G).