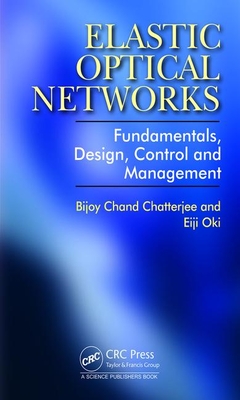 The rapid growth in communications and internet has changed our way of life, and our requirement for communication bandwidth. Optical networks can enable us to meet the continued demands for this bandwidth, although conventional optical networks struggle in achieving this, due to the limitation of the electrical bandwidth barrier. Flexgrid technology is a promising solution for future high-speed network design. To promote an efficient and scalable implementation of elastic optical technology in the telecommunications infrastructure, many challenging issues related to routing and spectrum allocation (RSA), resource utilization, fault management and quality of service provisioning must be addressed. This book reviews the development of elastic optical networks (EONs), and addresses RSA problems with spectrum fragment issues, which degrade the quality of service provisioning. The book starts with a brief introduction to optical fiber transmission system, and then provides an overview of the wavelength division multiplexing (WDM), and WDM optical networks. It discusses the limitations of conventional WDM optical networks, and discusses how EONs overcome these limitations. It presents the architecture of the EONs and its operation principle. To complete the discussion of network architecture, this book focuses on the different node architectures, and compares their performance in terms of scalability and flexibility. It reviews and classifies different RSA approaches, including their pros and cons. It focuses on different aspects related to RSA. The spectrum fragmentation is a serious issue in EONs, which needs to be managed. The book explains the fragmentation problem in EONs, discusses, and analyzes the major conventional spectrum allocation policies in terms of the fragmentation effect in a network. The taxonomies of the fragmentation management approaches are presented along with different node architectures. State-of-the-art fragmentation management approaches are looked at. A useful feature of this book is that it provides mathematical modeling and analyzes theoretical computational complexity for different problems in elastic optical networks. Finally, this book addresses the research challenges and open issues in EONs and provides future directions for future research.

Bijoy Chand Chatterjee is an Assistant Professor and DST Inspire Faculty at South Asian University, New Delhi, India. He is also an Adjunct Professor at Indraprastha Institute of Information Technology Delhi (IIITD), New Delhi. He received the Ph.D. degree from the Department of Computer Science and Engineering, Tezpur University, in 2014. From 2014 to 2017, he was a Post-Doctoral Researcher with the Department of Communication Engineering and Informatics, The University of Electro-Communications, Tokyo, Japan. From 2017 to 2018, he worked as a DST Inspire Faculty at IIITD, India. In 2018, he joined South Asian University, New Delhi, India. Before joining South Asian University, he was an ERCIM Postdoctoral Researcher at the Norwegian University of Science and Technology (NTNU), Norway. His research interests include Optical networks, QoS-aware protocols, Optimization, and Routing. He is a Senior Member of IEEE and a Life Member of IETE.

Eiji Oki is a Professor at Kyoto University, Japan. He received the B.E. and M.E. degrees in instrumentation engineering and a Ph.D. degree in electrical engineering from Keio University, Yokohama, Japan, in 1991, 1993, and 1999, respectively. He was with Nippon Telegraph and Telephone Corporation (NTT) Laboratories, Tokyo, from 1993 to 2008, and The University of Electro-Communications, Tokyo, from 2008 to 2017. From 2000 to 2001, he was a Visiting Scholar at the Polytechnic Institute of New York University, Brooklyn. In 2017, he joined Kyoto University, Japan. He has authored/contributed to twelve IETF RFCs. Prof. Oki was the recipient of the 1999 IEICE Excellent Paper Award, the 2001 IEEE Communications Society Asia-Pacific Outstanding Young Researcher Award, the 2010 Telecom System Technology Prize by the Telecommunications Advanced Foundation, the IEEE HPSR Paper Awards in 2012, 2014, and 2018, the 2015 IEICE Achievement Award, the IEEE Globecom 2015 Best Paper Award, the 2016 Fabio Neri Best Paper Award Runner Up in Optical Switching and Networking, Elsevier, and the Excellent Paper Award of 2019 Information and Communication Technology on Convergence. His research interests include routing, switching, protocols, optimization, and traffic engineering in communication and information networks. He is a Fellow of IEEE and IEICE.