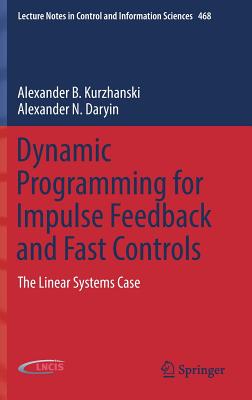 Dynamic Programming for Impulse Feedback and Fast Controls offers a description of feedback control in the class of impulsive inputs. This book deals with the problem of closed-loop impulse control based on generalization of dynamic programming techniques in the form of variational inequalities of the Hamilton-Jacobi-Bellman type. It provides exercises and examples in relation to software, such as techniques for regularization of ill-posed problems. It also gives an introduction to applications such as hybrid dynamics, control in arbitrary small time, and discontinuous trajectories.

This book walks the readers through:

Of interest to both academics and graduate students in the field of control theory and applications, the book also protects users from common errors, such as inappropriate solution attempts, by indicating Hamiltonian techniques for hybrid systems with resets.

Alexander B. Kurzhanski was born in 1939. He graduated with honours in electrical engineering at the Technical University of Ural, Sverdlovsk, USSR (1962). He did his graduate studies in mathematics and mechanics at classical University of Ural (1962-1965), having received his PhD-equivalent degree in 1965 and habilitation doctorate in 1971. He became full professor in 1974. In 1967-1984 he was at Institute of Mathematics and Mechanics, Ural Branch, Academy of Sciences of USSR as a Senior Researcher, Head of Department and finally Director. He was Chairman of Systems and Decision Sciences Program, Deputy Director at IIASA (the International Institute for Applied Systems Analysis), Laxenburg, Austria (1984-1992). He is Head of Department of Systems Analysis, Lomonosov Moscow State University (MSU), Faculty of Computational Mathematics and Cybernetics (1992-present) and also a distinguished professor of MSU (1999). He was elected associate member of the Russian (former Soviet) Academy of Sciences in 1981 and Full Member in 1990. He is Chairman of Russian National Committee on Automatic Control (the IFAC NMO, 1998-present). He also holds a visiting research position at UC-Berkeley, USA. His research interests and achievements are in the field of estimation and control under uncertainty and incomplete (realistic) information, feedback control of complex systems, inverse problems of mathematical physics, computational methods in dynamics and control and mathematical modeling for applied systems analysis.

Alexander N. Daryin was born in 1979. He graduated with honours from the Faculty of Computational Mathematics and Cybernetics at Lomonosov Moscow State University in 2001. He did his graduate studies in mathematics (pure and applied) at same faculty (2001-2004). He received PhD-equivalent degree in 2004. He worked as an associate professor at same faculty, Department of Systems Analysis (2004-2014). He currently works at Google Research in Zurich. He authored or coauthored more than 25 research journal and conference papers. His interests lie in the theory and applications of feedback control for complex systems, including control under uncertainty, impulse control and computational methods.