Rage Inside the Machine: The Prejudice of Algorithms, and How to Stop the Internet Making Bigots of Us All 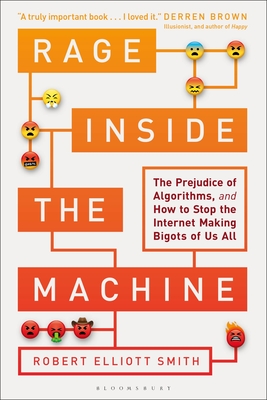 We live in a world increasingly ruled by technology; we seem as governed by technology as we do by laws and regulations. Frighteningly often, the influence of technology in and on our lives goes completely unchallenged by citizens and governments. We comfort ourselves with the soothing refrain that technology has no morals and can display no prejudice, and it's only the users of technology who distort certain aspects of it.

But is this statement actually true? Dr Robert Smith thinks it is dangerously untrue in the modern era.

Having worked in the field of artificial intelligence for over 30 years, Smith reveals the mounting evidence that the mechanical actors in our lives do indeed have, or at least express, morals: they're just not the morals of the progressive modern society that we imagined we were moving towards. Instead, as we are just beginning to see - in the US elections and Brexit to name but a few - there are increasing incidences of machine bigotry, greed and the crass manipulation of our basest instincts.

It is easy to assume that these are the result of programmer prejudices or the product of dark forces manipulating the masses through the network of the Internet. But what if there is something more fundamental and explicitly mechanical at play, something inherent within technology itself?

This book demonstrates how non-scientific ideas have been encoded deep into our technological infrastructure. Offering a rigorous, fresh perspective on how technology has brought us to this place, Rage Inside the Machine challenges the long-held assumption that technology is an apolitical and amoral force. Shedding light on little-known historical stories and investigating the complex connections between scientific philosophy, institutional prejudice and new technology, this book offers a new, honest and more truly scientific vision of ourselves.

Rob Smith authored over 35 journal articles, 10 book chapters, and over 75 conference papers on these subjects. He has conducted research projects for the U.S. Army Strategic Defense Command, The Center for Nonlinear Studies, Los Alamos National Laboratory, Oak Ridge National Laboratories, NASA, Boeing, NSF, EPSRC, the European Union, DERA, British Aerospace, Airbus, and British Telecom. Rob is a former Associate Editor of The IEEE Transactions on Evolutionary Computation, and the journal Evolutionary Computation and a fellow of the RSA: The Royal Society for the encouragement of Arts, Manufactures and Commerce.

Currently, he works as Chief Technology Office for BOXARR Ltd, a company he helped to found. He also works part time as a Senior Research Fellow of Computer Science at University College London, where he was also a founding member of The UCL Centre for The Study of Decision-Making Uncertainty.