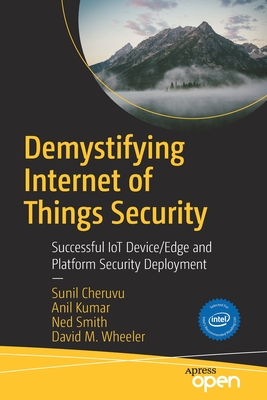 Break down the misconceptions of the Internet of Things by examining the different security building blocks available in Intel Architecture (IA) based IoT platforms. This open access book reviews the threat pyramid, secure boot, chain of trust, and the SW stack leading up to defense-in-depth.
The IoT presents unique challenges in implementing security and Intel has both CPU and Isolated Security Engine capabilities to simplify it. This book explores the challenges to secure these devices to make them immune to different threats originating from within and outside the network. The requirements and robustness rules to protect the assets vary greatly and there is no single blanket solution approach to implement security.

Who This Book Is For
Strategists, developers, architects, and managers in the embedded and Internet of Things (IoT) space trying to understand and implement the security in the IoT devices/platforms.

Sunil Cheruvu is a Principal Engineer in the Platform Engineering Division of IOTG at Intel Corporation and has been involved in architecting complex systems involving HW/FW/SW for almost 23 years. Implementing the code for Baseline Privacy security in DOCSIS compliant Cable Modems when he was a Senior SW Engineer at 3com and a SW Staff Engineer at Conexant. Working at Microsoft as a SW Design Engineer, he was the tech lead for Vehicle Networking involving the Bus and Protocol driver stacks. He took the stacks through the threat modeling and implemented the resolutions in what was released as the Windows Mobile for Automotive (WMfA) platform.

At Intel, he was the Content Protection lead and owned the system level architecture of Conditional Access and Trusted Data Path (end-2-end premium content protection within a SoC.) Architecting the security for embedded devices and in his current role as the Principal Engineer, owns the scaling of security (from below Atom to Xeon) and on multiple Operating Systems. He is the subject matter expert for IOTG security across Intel and outside of Intel.

Anil Kumar is a Principal Engineer in the Platform Engineering Division of IOTG at Intel Corporation, and is responsible for the Connectivity Platform Architecture across IOTG. In this role, he leads the effort with the planning team to create IOTG's first ever roadmap for connectivity solutions. He is currently driving platform and chip level integration of several key connectivity and communication technologies which are critical for Cyber Physical Systems. Anil joined Intel in 2007 as a design engineer in Digital Home Group. He served as Platform Architect for several Intel Architecture based Media Processors for TV and Set Top Box applications. As the chief architect in Intel Media Group Anil lead several designs that resulted in award winning consumer electronic device designs at CES. The world's first Google TV devices were based on reference design efforts lead by Anil as well. Prior to joining Intel, Anil held design engineering positions at multinational companies such as Fujitsu & Alcatel. He was instrumental in taking several designs from concept to production throughout his career.

Ned Smith is a Principal Engineer in the Open Technology Center (OTC) team in the Software Solutions Group at Intel Corporation. He is responsible for defining Internet of Things security architecture and standards for open IoT technologies. This includes defining IoT architecture for Open Connectivity Foundation (OCF) and IPSO Alliance. Ned chairs the Security, Privacy and Identity (SPI) work group in IPSO Alliance. He is co-author of the Internet Engineering Task Force (IETF) draft specification, draft-hardjono-ace-fluffy-03 that defines key management for constrained environments.
Ned joined Intel Labs in 1995 where he helped define the Common Data Security Architecture (CDSA) that was standardized by the Open Group. He chaired the Infrastructure Workgroup (IWG) in the Trusted Computing Group (TCG) from its inception until 2006. The IWG may best be known for its work on Network Access Control (NAC) standards that later became the Trusted Network Connect (TNC) working group within the TCG. The TNC standards were adopted by a majority of network security vendors supplying NAC products.
Ned has been highly influential within Intel having contributed to a long list of enterprise and office security technologies including Intel(R) Identity Protection Technology, Intel(R) Anti-theft Technology, Intel(R) Manageability Engine, Intel(R) Converged Security Engine, Intel(R) Trusted Execution Technology, Intel(R) Insider(TM), Intel(R) Virtualization Technology, Intel(R) Deep Defender(TM), Intel(R) Platform Trust Technology, Intel(R) Software Guard Extensions and numerous other security, privacy, identity and access management related projects.
Ned is a prolific inventor having received Intel's highest award for patent filing in 2014. He has more than 115 patents granted and over 290 patents pending.
Dave Wheeler is a Senior Principal Engineer in the Platform Security Division of IAGS at Intel Corporation and has thirty years' experience in software, security and networking. In his current role, Dave is responsible for research and development of new cryptographic algorithms and protocols, security APIs and libraries across Intel including for IoT platforms, performs security reviews on Intel's cryptographic implementations, and represents Intel at the IETF. Within the Internet of Things, Dave has contributed to Intel's Software-Defined Industrial Systems architecture and IOTG's Health Application Platform. Prior to Intel, Dave held various lead software and systems architecture positions at Motorola, Honeywell Bull, General Dynamics, as well as his own consulting firm. Dave has designed and built several hardware security engines, including a Type-2 security coprocessor for a software defined radio, and the Intel Wireless Trust Module, a hardware cryptographic coprocessor on the Intel XScale processor. He has implemented several cryptographic libraries and protocol layers, including an IPSec-type implementation for an SDR radio, header compression protocol layers for IP, TCP, and UDP over multicast, a connectionless network layer protocol, two-factor authentication verification over RADIUS for a firewall VPN, PPP for serial, an instant messaging protocol over Bluetooth, and many others. Dave has been a key contributor to other full-stack product implementations including Intel's Blue River Network appliance, several complete public Internet applications in PHP, JavaScript/Sails, and even VBScript. Dave has also worked on smartcard security for banking and gaming applications at a startup, Touch Technology. While at Motorola in 1992, Dave authored the "Security Association Management Protocol" for the National Security Agency, and subsequently spoke nationally about key management and key management protocols. He has led clean-room implementations for ISAKMP, IKEv2, and a custom network-keying protocol. Dave's extensive experience in security, networking, software and hardware is leveraged across a broad segment of Intel's Internet of Things to make Intel's products and software projects secure.