Turning Silicon Into Gold: The Strategies, Failures, and Evolution of the Tech Industry 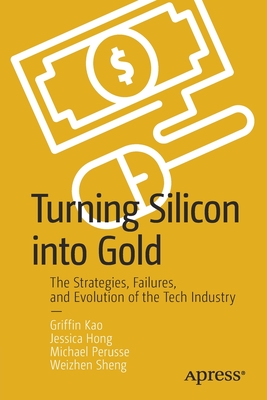 A few square miles of Northern California contain some of the world's largest companies whose products affect billions of people every single day. What made these giants of Silicon Valley as impactful as they are? What do their paths to success have in common?

Turning Silicon into Gold is a sharp analysis of 25 case studies examining just that. Authors Griffin Kao, Jessica Hong, Michael Perusse, and Weizhen Sheng provide relevant commentary as they explore the stories behind companies such as Apple, Amazon, OpenTable, and many more. These organizations used unique problem-solving strategies to forever change the face of tech--whether it was Facebook's second mover advantage over MySpace or Nintendo's leap of faith in the 1980s to revitalize the video game industry.

Learn by example as Turning Silicon into Gold divulges the inner workings behind some of the most significant business decisions in tech history. The nuanced ways these companies tackled emerging markets and generated growth in uncertain times is essential knowledge for modern business leaders, innovators, and aspiring founders. Whether you are simply curious about the origins of the world's tech giants or you are an entrepreneur looking for inspiration, the thoughtful, comprehensive case study collection that is Turning Silicon into Gold belongs on your bookshelf.

What You Will Learn
Who This Book is For
The book is for people currently in or interested in exploring a career in the intersection of technology and business, such as product management, entrepreneurship, or non-coding positions at a tech company--it's also great for people generally curious about how the tech industry operates. The book offers case studies in an engaging and approachable way, while still providing important takeaways and probing questions--perfect for the casual reader or even someone trying to prepare for interviews.

Griffin Kao has a background in computer science, mechanical engineering, and economics from Brown University. He's worked as both a software engineer and product manager at B2B and B2C tech companies, both large and small, and has acquired a lot of insight into how the industry operates.

Jessica Hong is studying computer science at Cornell University. She's been able to witness the impact of technology in the world through her previous roles as a software engineer, product manager, and venture capital partner.

Michael Perusse, Harvard University class of 2020, studied computer science and mathematical sciences. He's worked in product management at both Google, Microsoft, and startups, and has written for a variety of magazines and websites.

Weizhen Sheng is studying Networked and Social Systems Engineering and pursuing a Master's degree in Data Science at the University of Pennsylvania. She has previously worked as a product manager and software engineer in the tech industry, and as an analyst at an investment board, offering her varying perspectives on the role of technology.