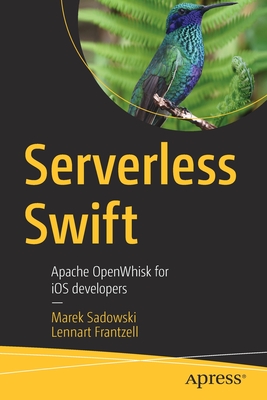 Decrease development time to market with Serverless Swift--the event-based modern architecture for full stack developers. This book reviews how to use the Apache OpenWhisk framework to enrich your standalone applications with cloud-based functionalities from data sources up to Artificial Intelligence.

You'll leverage serverless in your mobile apps with use case scenarios and gain the skills that will allow you to create robust, performant, secure yet economically viable systems in a cloud native environment. Finally, you'll see how to participate in the creation and further development of this open source project with Apache Foundation, which is supported by IBM, Google, and others

Serverless has become a new style of coding, and it can be used to offload your mobile apps without incurring unnecessary costs. Get a solid, hands-on introduction into serverless, function-as-a-service, and cloud function technologies and learn why startups and enterprises are so excited about using them.

Who This Book Is For
Developers, development leaders in the enterprise, and startup CTOs who want to learn a leading technology for the cloud in order to enrich applications with SaaS, Social Networks, and cloud based AI and APIs.

Lennart Frantzell is a Developer Advocate with IBM in San Francisco, focusing on Blockchain and AI. Born in Sweden, Lennart moved to Silicon Valley in the late 1980s to work with Expert Systems. He worked on a team that specialized in taking prototypes from IBM Research and productizing them, making them ready for distribution to all over the world. When the "AI Winter" put the breaks to development of Expert Systems, Lennart moved to Object Oriented programming and from there to the IBM Internet Division, part of the burgeoning Internet and Web movement in the late 1990s.
Marek Sadowski is a full stack developer advocate, a robotics startup founder and an entrepreneur. Born in Poland, he has about 20 years experience in consulting large enterprises in America, Europe, Japan, the Middle East, and Africa. As a graduate from the International Space University, Marek pioneered research on VR goggles for the virtual reality system to control robots on Mars in NASA Ames in 1999. He also founded a startup to deliver robotics solutions and services for industries. In 2014, Marek moved to Silicon Valley to promote Edge, IoT, robotics, and mobile solutions driven with AI, APIs, Cloud Native.