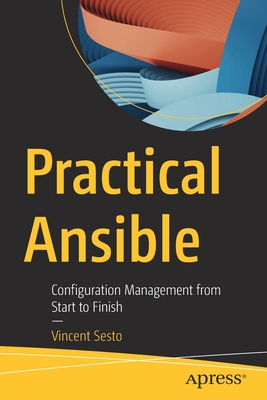 Practical Ansible is separated into seven chapters that allow you to build your knowledge with each chapter, developing further as we move through the examples provided. It begins with the basics of Ansible, providing you with details on how to install and configure your environment while working with different Ansible modules from the command line. Next, it introduces you to working with Ansible tasks and organizing configuration code into playbooks.

The book then shows you how to extend playbooks further, using roles and templates within the configuration code. Then, it extends your knowledge further by covering custom Ansible modules using Python and Linux shell scripts, and demonstrating how you can start to keep your secret values encrypted and secure using Ansible Vault. You'll also extend Ansible roles with the use of Ansible Galaxy to reuse existing roles other users have created.

The second half of the book moves configuration management to the Amazon cloud providing an introduction on what Amazon Web Services are, and how you can start to work with Ansible roles in AWS. The AWS examples use EC2 and CloudFormation services with Ansible template functions, Ansible Pull, and Ansible Git code deployment.

The final part of the book includes a demonstration on how to use the numerous tools available to both Ansible and supporting libraries and modules to allow you to troubleshoot and test your configuration code before you deploy your changes to production systems.

By the end of this book, you will have the skills for managing technology configuration management. You will be ready to work on real-world projects and be able to implement Ansible in your own technology projects.

System administrators, DevOps engineers, software engineers, and developers wanting to extend their current knowledge of computer systems and incorporate Ansible as a configuration management tool within them.

Vincent Sesto is a DevOps engineer, endurance athlete and author.

As a DevOps engineer Vince specializes in Linux, Amazon Web Services, and open source applications. He is particularly interested in developing his skills in DevOps, continuous integration, security, log aggregation (management, UI, and reporting), and Python development. In his spare time, you'll find him running or cycling for long periods of time, making the most of his time outdoors.

Feel free to reach out to me on LinkedIn.