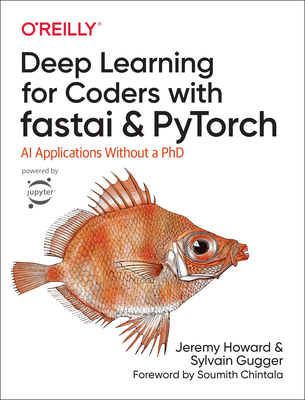 Deep learning has the reputation as an exclusive domain for math PhDs. Not so. With this book, programmers comfortable with Python will learn how to get started with deep learning right away.

Using PyTorch and the fastai deep learning library, you'll learn how to train a model to accomplish a wide range of tasks--including computer vision, natural language processing, tabular data, and generative networks. At the same time, you'll dig progressively into deep learning theory so that by the end of the book you'll have a complete understanding of the math behind the library's functions.

Sylvain is a former teacher and a Research Scientist at fast.ai, with a focus on making deep learning more accessible by designing and improving techniques that allow models to train fast on limited resources.

Prior to this, Sylvain wrote several books covering the entire curriculum he was teaching in France (published at Éditions Dunod) until 2015 in CPGE. CPGE are a French specific two-year program whereby handpicked students who graduated high school follow an intense preparation before sitting for the competitive exam to enter the top engineering and business schools of the country. Sylvain taught computer science and mathematics in that program for seven years.

Sylvain is an alumni from École Normale Supérieure (Paris, France) where he studied mathematics and has a Master's Degree in mathematics from University Paris XI (Orsay, France).

Jeremy Howard is an entrepreneur, business strategist, developer, and educator. Jeremy is a founding researcher at fast.ai, a research institute dedicated to making deep learning more accessible. He is also a Distinguished Research Scientist at the University of San Francisco, a faculty member at Singularity University, and a Young Global Leader with the World Economic Forum.

Jeremy's most recent startup, Enlitic, was the first company to apply deep learning to medicine, and has been selected one of the world's top 50 smartest companies by MIT Tech Review two years running. He was previously the President and Chief Scientist of the data science platform Kaggle, where he was the top ranked participant in international machine learning competitions 2 years running. He was the founding CEO of two successful Australian startups (FastMail, and Optimal Decisions Group-purchased by Lexis-Nexis). Before that, he spent 8 years in management consulting, at McKinsey & Co, and AT Kearney. Jeremy has invested in, mentored, and advised many startups, and contributed to many open source projects.

He has many television and other video appearances, including as a regular guest on Australia's highest-rated breakfast news program, a popular talk on TED.com, and data science and web development tutorials and discussions.