Introduction to Ultrafast Phenomena: From Femtosecond Magnetism to High-Harmonic Generation 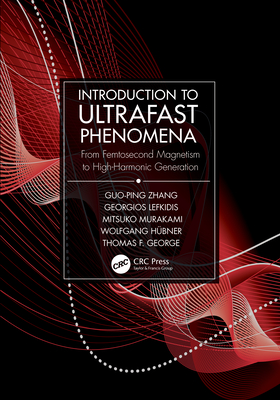 This book, the first of this kind, provides a comprehensive introduction to ultrafast phenomena, covering the fundamentals of ultrafast spin and charge dynamics, femtosecond magnetism, all-optical spin switching, and high-harmonic generation. It covers the experimental tools, including ultrafast pump-probe experiments, and theoretical methods including quantum chemistry and density functional theory, both time-independent and time-dependent. The authors explain in clear language how an ultrafast laser pulse is generated experimentally, how it can induce rapid responses in electrons and spins in molecules, nanostructures and solids (magnetic materials and superconductors), and how it can create high-harmonic generation from atoms and solids on the attosecond timescale. They also show how this field is driving the next generation of magnetic storage devices through femtomagnetism, all-optical spin switching in ferrimagnets and beyond, magnetic logic in magnetic molecules, and ultrafast intense light sources, incorporating numerous computer programs, examples, and problems throughout, to show how the beautiful research can be done behind the scene.

- Provides a clear introduction to modern ultrafast phenomena and their applications in physics, chemistry, materials sciences, and engineering.

- Presents in detail how high-harmonic generation occurs in atoms and solids.

- Includes numerous worked-out examples and problems in each chapter, with real research codes in density functional theory and quantum chemical calculations provided in the chapters and in the Appendices.

This book is intended for undergraduate and graduate students, researchers in physics, chemistry, biology, materials sciences, and engineering.

Georg Lefkidis is a tenured senior lecturer (Privatdozent) in the Department of Physics at the Technische Universität Kaiserslautern. He obtained his diploma degree in the Department of Chemistry at the Aristotle University in Thessaloniki, Greece, with a focus in theoretical quantum chemistry under the supervision of C. A. Tsipis; his Ph.D. in the same department with a focus on the border between theoretical quantum chemistry and solid-state physics under the supervision of G. Katsoulos; and his habilitation in theoretical physics in the Department of Physics at the Technische Universität Kaiserslautern under the mentorship of W. Hübner. His scientific interest comprises, among others, the fundamental understanding and active manipulation of the magnetic properties of molecules and nanoclusters (notably with the goal to suggest and design nanospintronics elements), as well as their quantum thermodynamic features. He has co-authored 68 peer-reviewed scientific articles and contributed to one book. After three guest professorships in the School of Mechanics, Civil Engineering, and Architecture, at the Northwestern Polytechnical University in Xi'an, he was awarded an Adjunct Research Fellowship at the same department, within the Thousand-Talents Program of China. Besides his scientific path, G. Lefkidis has also obtained a piano soloist degree and is an active musician with numerous piano, chamber music, and choir concerts in Greece, Germany, France, Canada, and the USA.

Mitsuko Murakami is a visiting professor of physics at Indiana State University. She received her B.S. degree in physics from McNeese State University in Lake Charles, Louisiana, and both master's and Ph.D. degrees from Louisiana State University in Baton Rouge, specializing in computational atomic, molecular and optical physics. Her dissertation research was about high-harmonic generation of noble-gas atoms and its application to attophysics, under the supervision of Dr. Mette Gaarde. She held postdoctoral research positions in the group of Drs. Marko Horbatsch and Tom Kirchner at York University in Toronto, Canada, and in the group of Shi-I Chu at National Taiwan University in Taipei, Taiwan. She also worked in the group of Dr. Lei Wei in the field of bioinformatics at Roswell Park Cancer Institute in Buffalo, New York, before accepting her current position in the group of Dr. Guo-ping Zhang at Indiana State University. Mitsuko has published over 20 peer-reviewed research papers and co-authored two book chapters. During the studies for her master's degree, she participated in the world-renowned experiment at Kamioka Liquid Scintillator Antineutrino Detector (KamLAND) in Japan to measure the three-flavor oscillation of antineutrinos. This work earned the Breakthrough Prize in Fundamental Physics in 2016.

Wolfgang Hübner is a professor of theoretical physics at Technische Universität Kaiserslautern (Department of Physics and Research Center OPTIMAS) since 2002. Before, he held appointments at the Max-Planck-Institute of Microstructure Physics in Halle and the Freie Universität Berlin. He received his doctor's degree in Munich, his Habilitation in Berlin, and spent extended research stays and sabbaticals at ILL Grenoble, UC Berkeley, IPCMS Strasbourg, Karl-Franzens-Universität Graz as a visiting professor, and Martin-Luther-Universität Halle-Wittenberg. He is a recipient of the Karl-Scheel-Prize of the Berlin Physical Society. Wolfgang Hübner has coauthored 150 refereed publications in condensed matter theory. His research focuses on structure, spectroscopy, laser-induced femtosecond charge and spin dynamics, and functionalization of magnetic and nonmagnetic molecular nanostructures. A further scientific interest of his group is on quantum thermodynamics of small molecules and clusters.

Thomas F. George (chancellor/professor emeritus) served as chancellor and professor of chemistry and physics at the University of Missouri-St. Louis from 2003 until his retirement in 2019. Prior to that, he was chancellor at the University of Wisconsin-Stevens Point, provost at Washington State University, dean of science at SUNY-Buffalo, and promoted by age 29 to full professor of chemistry at the University of Rochester. He received his B.A. degree (Phi Beta Kappa) with a double major in chemistry and mathematics from Gettysburg College, and his M.S. and Ph.D. degrees at age 23 from Yale University, with postdoctoral appointments at MIT and UC-Berkeley. Tom's research specialty is chemical/materials/laser/nanophysics, including nanomedicine. He continues to be an active researcher with 800 papers, 8 authored and 20 edited books. His awards include the Marlow Medal from the Royal Society of Chemistry (UK), Medal of Honor from Gulf University for Science and Technology in Kuwait, and Diploma of Honour from Seinájoki University of Applied Sciences in Finland. He holds honorary doctorates from the University of Szeged in Hungary and Phranakhon Rajabhat University in Thailand, and he has been elected as a foreign member of the Korean Academy of Science and Technology. As a hobby, he plays jazz keyboard and has performed throughout the St. Louis region and overseas in Bosnia, Croatia, China, Hungary, Kuwait, Oman, Romania and Russian Siberia. Tom has been married since 1970 to Dr. Barbara Harbach, Curators' Distinguished Professor Emerita of Music, former chair of the Department of Music, director of the School of Fine and Performing Arts, and director of Women in the Arts at the University of Missouri-St. Louis. They are the proud owners (actually, servants) of four cats - two tortoise females (Luna and Stella) and two younger, mischievous males (Jeremiah and Jarrett).