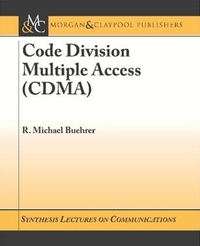 This book covers the basic aspects of Code Division Multiple Access or CDMA. It begins with an introduction to the basic ideas behind fixed and random access systems in order to demonstrate the difference between CDMA and the more widely understood TDMA, FDMA or CSMA. Secondly, a review of basic spread spectrum techniques are presented which are used in CDMA systems including direct sequence, frequency-hopping and time-hopping approaches. The basic concept of CDMA is presented, followed by the four basic principles of CDMA systems that impact their performance: interference averaging, universal frequency reuse, soft handoff, and statistical multiplexing. The focus of the discussion will then shift to applications. The most common application of CDMA currently is cellular systems. A detailed discussion on cellular voice systems based on CDMA, specifically IS-95, is presented. The capacity of such systems will be examined as well as performance enhancement techniques such as coding and spatial filtering. Also discussed are Third Generation CDMA cellular systems and how they differ from Second Generation systems. A second application of CDMA that is covered is spread spectrum packet radio networks. Finally, there is an examination of multi-user detection and interference cancellation and how such techniques impact CDMA networks. This book should be of interest and value to engineers, advanced students, and researchers in communications.