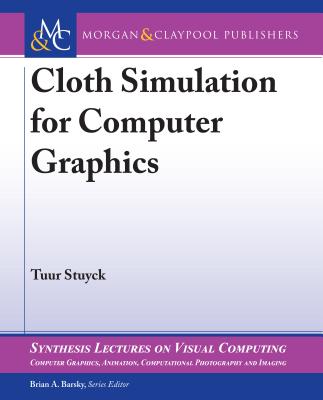 Physics-based animation is commonplace in animated feature films and even special effects for live-action movies. Think about a recent movie and there will be some sort of special effects such as explosions or virtual worlds. Cloth simulation is no different and is ubiquitous because most virtual characters (hopefully ) wear some sort of clothing.

The focus of this book is physics-based cloth simulation. We start by providing background information and discuss a range of applications. This book provides explanations of multiple cloth simulation techniques. More specifically, we start with the most simple explicitly integrated mass-spring model and gradually work our way up to more complex and commonly used implicitly integrated continuum techniques in state-of-the-art implementations. We give an intuitive explanation of the techniques and give additional information on how to efficiently implement them on a computer.

This book discusses explicit and implicit integration schemes for cloth simulation modeled with mass-spring systems. In addition to this simple model, we explain the more advanced continuum-inspired cloth model introduced in the seminal work of Baraff and Witkin 1998]. This method is commonly used in industry.

We also explain recent work by Liu et al. 2013] that provides a technique to obtain fast simulations. In addition to these simulation approaches, we discuss how cloth simulations can be art directed for stylized animations based on the work of Wojtan et al. 2006]. Controllability is an essential component of a feature animation film production pipeline. We conclude by pointing the reader to more advanced techniques.

Tuur Stuyck started working with computer graphics as early as 2006. He created several computer-animated short stories that were selected by international film festivals and won a number of prizes at national youth film festivals. He later became a jury member for the MakingMovies and Kunstbende youth film festivals. In addition to working on his own short movies during his high school and university years, Tuur also worked summer jobs at Cyborn Animation Studios in Antwerp, Belgium.