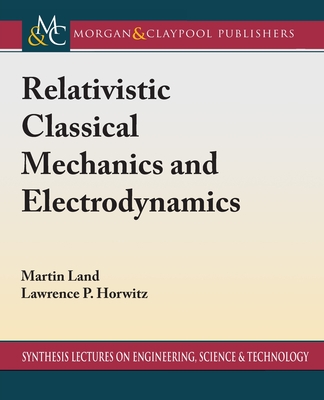 This book presents classical relativistic mechanics and electrodynamics in the Feynman-Stueckelberg event-oriented framework formalized by Horwitz and Piron.

The full apparatus of classical analytical mechanics is generalized to relativistic form by replacing Galilean covariance with manifest Lorentz covariance and introducing a coordinate-independent parameter to play the role of Newton's universal and monotonically advancing time. Fundamental physics is described by the -evolution of a system point through an unconstrained 8D phase space, with mass a dynamical quantity conserved under particular interactions. Classical gauge invariance leads to an electrodynamics derived from five -dependent potentials described by 5D pre-Maxwell field equations. Events trace out worldlines as advances monotonically, inducing pre-Maxwell fields by their motions, and moving under the influence of these fields. The dynamics are governed canonically by a scalar Hamiltonian that generates evolution of a 4D block universe defined at to an infinitesimally close 4D block universe defined at +. This electrodynamics, and its extension to curved space and non-Abelian gauge symmetry, is well-posed and integrable, providing a clear resolution to grandfather paradoxes. Examples include classical Coulomb scattering, electrostatics, plane waves, radiation from a simple antenna, classical pair production, classical CPT, and dynamical solutions in weak field gravitation. This classical framework will be of interest to workers in quantum theory and general relativity, as well as those interested in the classical foundations of gauge theory.