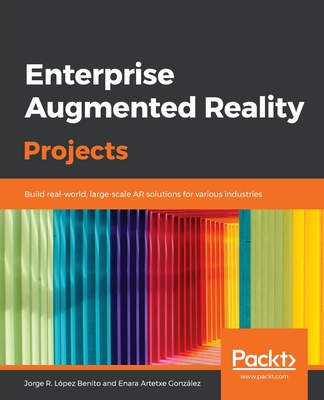 Augmented reality (AR) is expanding its scope from just being used in mobile and game applications to enterprise. Different industries are using AR to enhance assembly line visualization, guide operators performing difficult tasks, attract more customers, and even improve training techniques. In this book, you'll gain comprehensive insights into different aspects of developing AR-based apps for six different enterprise sectors, focusing on market needs and choosing the most suitable tool in each case.

You'll delve into the basics of Unity and get familiar with Unity assets, materials, and resources, which will help you build a strong foundation for working on the different AR projects covered in the book. You'll build real-world projects for various industries such as marketing, retail, and automation in a step-by-step manner. This will give you hands-on experience in developing your own industrial AR apps. While building the projects, you'll explore various AR frameworks used in the enterprise environment such as Vuforia, EasyAR, ARCore, and ARKit, and understand how they can be used by themselves or integrated into the Unity 3D engine to create AR markers, 3D models, and components of an AR app.

By the end of this book, you'll be well versed in using different commercial AR frameworks as well as Unity for building robust AR projects.

Jorge R. López Benito is a tech entrepreneur passionate about emerging and exponential technologies with more than 10 years of experience in researching and building Augmented Reality (AR), Virtual Reality (VR), and Artificial Intelligence (AI) products. In 2010, he became the co-founder and CEO of CreativiTIC, which focused on the research of disruptive technologies, new business models, and market innovation trends. He has been involved in several R&D projects throughout his career, including FP7 and H2020 European projects, and because of that, he was named as a Key Innovator in AR & Deep Learning Technologies by the European Commission; whom he also supports as an independent expert on interactive technologies to explore emerging trends and identify opportunities for impact across the industries, and also as a Jury Member at the European Innovation Council (EIC) Accelerator.

Enara Artetxe González is the co-founder and CTO of CreativiTIC, a company dedicated to Mixed Reality (MR) technologies. With a bachelor's degree in telecommunications engineering, she has been working with Augmented Reality (AR) and Virtual Reality (VR) technologies for more than 10 years, developing innovative solutions for desktop, mobile, web, and head-mounted display (HMD) platforms in fields such as industry, healthcare, and education. She has participated in several R&D projects including FP7 and H2020 European research projects, and because of that, she was named as a Key Innovator in AR & Deep Learning Technologies by the European Commission. She actively supports vocational actions to involve girls in science and technology through STEAM methodologies.