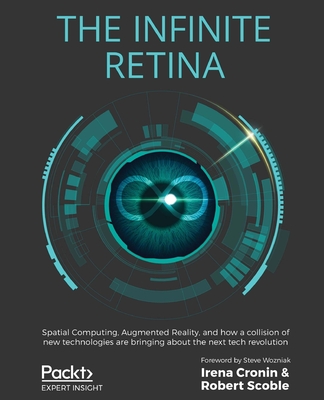 A compelling and insightful look at the future of Spatial Computing, and how this cutting-edge technology is changing the way we do business across seven primary industries, and what it means for humanity as a whole.

What is Spatial Computing and why is everyone from Tesla, Apple, and Facebook investing heavily in it?

In The Infinite Retina, authors Irena Cronin and Robert Scoble attempt to answer that question by helping you understand where Spatial Computing - an augmented reality where humans and machines can interact in a physical space - came from, where it's going, and why it's so fundamentally different from the computers or mobile phones that came before.

They present seven visions of the future and the industry verticals in which Spatial Computing has the most influence - Transportation; Technology, Media, and Telecommunications; Manufacturing; Retail; Healthcare; Finance; and Education.

The book also shares insights about the past, present, and future from leading experts an other industry veterans and innovators, including Sebastian Thrun, Ken Bretschneider, and Hugo Swart. They dive into what they think will happen in Spatial Computing in the near and medium term, and also explore what it could mean for humanity in the long term.

The Infinite Retina then leaves it up to you to decide whether Spatial Computing is truly where the future of technology is heading or whether it's just an exciting, but passing, phase.

The Infinite Retina is for anyone interested in the future of technology and how Augmented Reality and Spatial Computing (among other developments) will affect both businesses and the individual.

Irena Cronin is the CEO of Infinite Retina, a company based in Pasadena, California that helps businesses enter and succeed in Spatial Computing. She has advised many decision-makers on business strategies related to Spatial Computing which includes AR/VR, Artificial Intelligence, Facial Recognition, Robotics, Autonomous Vehicles, and other related technologies.

Robert Scoble is the Chief Strategy Officer (CSO) of Infinite Retina and a bestselling author. Over the course of his career, he has interviewed thousands of entrepreneurs and has been the first to see the creation of many new technology companies, from Siri to Tesla.

Part I: Why Spatial Computing and Why Now?