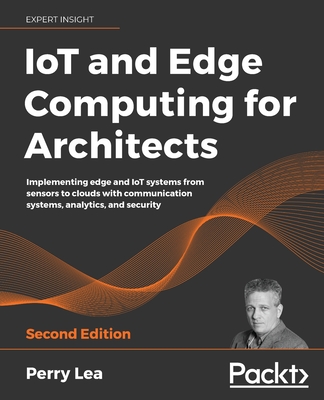 Industries are embracing IoT technologies to improve operational expenses, product life, and people's well-being. An architectural guide is needed if you want to traverse the spectrum of technologies needed to build a successful IoT system, whether that's a single device or millions of IoT devices.

IoT and Edge Computing for Architects, Second Edition encompasses the entire spectrum of IoT solutions, from IoT sensors to the cloud. It examines modern sensor systems, focusing on their power and functionality. It also looks at communication theory, paying close attention to near-range PAN, including the new Bluetooth® 5.0 specification and mesh networks. Then, the book explores IP-based communication in LAN and WAN, including 802.11ah, 5G LTE cellular, Sigfox, and LoRaWAN. It also explains edge computing, routing and gateways, and their role in fog computing, as well as the messaging protocols of MQTT 5.0 and CoAP.

With the data now in internet form, you'll get an understanding of cloud and fog architectures, including the OpenFog standards. The book wraps up the analytics portion with the application of statistical analysis, complex event processing, and deep learning models. The book then concludes by providing a holistic view of IoT security, cryptography, and shell security in addition to software-defined perimeters and blockchains.

Perry Lea is a 30-year veteran technologist. He spent over 20 years at Hewlett-Packard as chief architect and distinguished technologist of the LaserJet business. He then led a team at Micron focusing on emerging compute using in-memory processing for machine learning and computer vision. At Cradlepoint, he pivoted the company into 5G and the IoT. He then co-founded Rumble, an industry leader in edge/IoT products. He is the principal architect for Microsoft’s Xbox business and works on emerging technologies and hyperscale game streaming, and has authored 40 patents, with 30 pending.