The Essentials of Modern Software Engineering: Free the Practices from the Method Prisons! 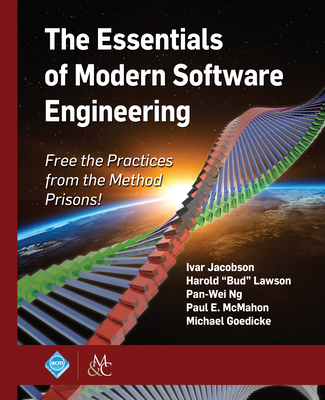 This kernel, Essence, is a vocabulary for defining methods and practices. Essence was envisioned and originally created by Ivar Jacobson and his colleagues, developed by Software Engineering Method and Theory (SEMAT) and approved by The Object Management Group (OMG) as a standard in 2014. Essence is a practice-independent framework for thinking and reasoning about the practices we have and the practices we need. Essence establishes a shared and standard understanding of what is at the heart of software development. Essence is agnostic to any particular method, lifecycle independent, programming language independent, concise, scalable, extensible, and formally specified. Essence frees the practices from their method prisons.

The first part of the book describes Essence, the essential elements to work with, the essential things to do and the essential competencies you need when developing software. The other three parts describe more and more advanced use cases of Essence. Using real but manageable examples, it covers the fundamentals of Essence and the innovative use of serious games to support software engineering. It also explains how current practices such as user stories, use cases, Scrum, and micro-services can be described using Essence, and illustrates how their activities can be represented using the Essence notions of cards and checklists. The fourth part of the book offers a vision how Essence can be scaled to support large, complex systems engineering.

Essence is supported by an ecosystem developed and maintained by a community of experienced people worldwide. From this ecosystem, professors and students can select what they need and create their own way of working, thus learning how to create ONE way of working that matches the particular situation and needs.

Dr. Ivar Jacobson received his Ph.D. in computer science from KTH Royal Institute of Technology, was awarded the Gustaf Dalén medal from Chalmers in 2003, and was made an honorary doctor at San Martin de Porres University, Peru, in 2009. Ivar has both an academic and an industry career. He has authored ten books, published more than a hundred papers, and is a frequent keynote speaker at conferences around the world. Ivar Jacobson is a key founder of components and component architecture, work that was adopted by Ericsson and resulted in the greatest commercial success story ever in the history of Sweden (and it still is). He is the creator of use cases and Objectory-which, after the acquisition of Rational Software around 2000, resulted in the Rational Unified Process, a popular method. He is also one of the three original developers of the Unified Modeling Language. But all this is history. His most recently founded company, Ivar Jacobson International, has been focused since 2004 on using methods and tools in a smart, superlight, and agile way. Ivar is also a founder and leader of a worldwide network, SEMAT, whose mission is to revolutionize software development based on a kernel of software engineering. This kernel has been realized as a formal standard called Essence, which is the key idea described in this book.