Space, Imagination and the Cosmos from Antiquity to the Early Modern Period 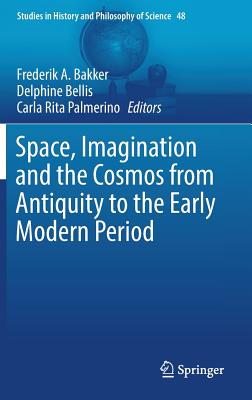 This volume provides a much needed, historically accurate narrative of the development of theories of space up to the beginning of the eighteenth century. It studies conceptions of space that were implicitly or explicitly entailed by ancient, medieval and early modern representations of the cosmos. The authors reassess Alexandre Koyr 's groundbreaking work From the Closed World to the Infinite Universe (1957) and they trace the permanence of arguments to be found throughout the Middle Ages and beyond. By adopting a long timescale, this book sheds new light on the continuity between various cosmological representations and their impact on the ontology and epistemology of space.

Readers may explore the work of a variety of authors including Aristotle, Epicurus, Henry of Ghent, John Duns Scotus, John Wyclif, Peter Auriol, Nicholas Bonet, Francisco Su rez, Francesco Patrizi, Giordano Bruno, Libert Froidmont, Marin Mersenne, Pierre Gassendi, Gottfried Wilhelm Leibniz and Samuel Clarke. We see how reflections on space, imagination and the cosmos were the product of a plurality of philosophical traditions that found themselves confronted with, and enriched by, various scientific and theological challenges which induced multiple conceptual adaptations and innovations.

This volume is a useful resource for historians of philosophy, those with an interest in the history of science, and particularly those seeking to understand the historical background of the philosophy of space.

Frederik Bakker is assistant professor in the History of Philosophy and Science at Radboud University in Nijmegen. The focus of his research is on the history of ancient philosophy and science, and more specifically Epicureanism. He is also interested in the ancient poets' engagement with philosophy and science and in the modern reception of ancient scientific ideas. He has published papers on ancient doxography and on topics in ancient and medieval poetry, and recently brought out a monograph on Epicurean astronomy and meteorology (Epicurean Meteorology, Leiden: Brill 2016).

Delphine Bellis is assistant professor in the History and Philosophy of Science at Paul Valéry University in Montpellier, France. She has previously worked as postdoctoral researcher at Utrecht University, Radboud University Nijmegen, Ghent University, and the Max Planck Institute for the History of Science in Berlin. Her research interest is primarily in the history of early modern philosophy and science, in particular optics and theories of space and matter, with a focus on Descartes and Gassendi. She has published papers on Descartes, Regius, and Gassendi, and participates in the edition of Descartes' complete correspondence edited by Roger Ariew, Erik-Jan Bos, and Theo Verbeek, to be published by Oxford University Press. She also is a member of the editorial board of Studium. Tijdschrift voor Wetenschaps- en Universiteitsgeschiedenis / Revue d'Histoire des Sciences et des Universités.

Carla Rita Palmerino is Professor in the History of Modern Philosophy and Director of the Center for the History of Philosophy and Science at Radboud University, Nijmegen. Her research focuses on the history of early-modern philosophy and science, and more specifically on theories of space, time and matter and on debates concerning the ontological and epistemological status of mathematical truths. She is also interested in the role of thought experiments in early modern science and philosophy. She has published on Galileo, Gassendi, Mersenne, Descartes, Froidmont, Leibniz, Newton and participates in the edition of Descartes' complete correspondence edited by Roger Ariew, Erik-Jan Bos, and Theo Verbeek, to be published by Oxford University Press. She is member of the editorial board of Galilæana: Journal of Galilean studies.